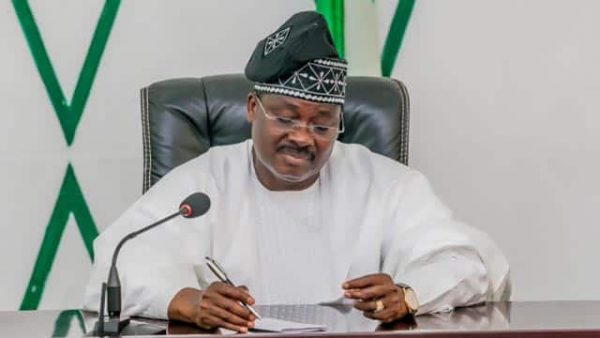 Governor Abiola Ajimobi of Oyo State has urged Christians to use the period of Easter to pray fervently for the safe return of Leah Sharibu and the remaining Chibok girls.
Ajimobi made the call in his Easter message signed by his Special Adviser on Communication and Strategy, Bolaji Tunji, and made available to newsmen in Ibadan on Friday.
He said: “I also want you to particularly remember to pray for the safe return of the last Dapchi girl, Leah Sharibu and the Chibok girls still under Boko Haram captivity.’’
He also urged Christians to pray for all the trouble spots across the country, particularly in the North-East to enjoy the restoration of peace and tranquility.
According to him, the Christians should intensify their prayers for the country to enable it to overcome its current socio-economic challenges.
The governor noted that the nation could only attain greatness in an atmosphere of love, togetherness and renewed commitment to the country’s oneness and unity.
Ajimobi appealed to the perpetrators of acts of terrorism, insurgency, militancy and kidnapping, among other acts to embrace amnesty and drop their arms.
He said: “Violence and criminality are ill winds that blow no one any good. There is no religion that is in support of taking people’s lives under whatever guise.
“Therefore, we must put immediate stop to all acts of terrorism, insurgency, militancy and kidnappings in all parts of the country.
“I’m appealing to the perpetrators to take advantage of the amnesty being offered them and drop their arms.
“We should all be promoting activities that will further enhance our peaceful co-existence and unity as a people.
“It is only under this atmosphere that our dear country can achieve the much-desired greatness.’’
The governor urged Nigerians to emulate Jesus Christ whom he said offered himself as sacrificial lamb for the redemption of making.
While congratulating Christians on the successful completion of the 40-day left, Ajimobi enjoined the Christians to use the period of the Easter to reflect on the essence of the death, resurrection and ascension of Jesus Christ.
He said: “Easter is not about wining and dining alone, but an occasion to realise the need to love one another as exhibited by God.
“It is out of God’s love for mankind that He offered Jesus Christ to die for our sins and to give life more abundant.
“Let us eschew all divisive tendencies, violence and other things that are antithetical to the teachings of Jesus Christ, which centered on love and compassion for one another.’’
He commended Christians, Muslims and other religious adherents in the state for their peaceful co-existence, urging them to intensify their prayers for his administration in its quest to ensure better life for all citizens and residents.