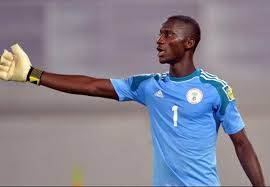 The Golden Eaglets of Nigeria apart from emerging world champions after spanking the defending champions, Mexico, 3-0 on Friday at Abu Dhabi, United Arab Emirates to emerge the winner of the 15th Edition of the FIFA U- 17 World Cup, the team as well as two members of the team also won individual awards of the competition.
The Eaglets won the Fair Play Award for collecting less cautions in the competition while Nigeria’s outstanding No 10, Kelechi Iheanacho, won the tournament’s best player and the second top-scorer, having scored six goals and setting up a further seven en route to a fourth title for the West Africans.
Team’s first choice goalkeeper, Dele Alampasu, emerged best goalkeeper of the tournament, having had an impressive run.
Alapamsu made four world class saves in the final match between his team and Mexico, which helped his side to create a new record of the only team to have won the competition four times and scoring the tournament’s highest goal of 26 in a single tournament, thereby throwing to the dustbin Germany’s former record of 24 goals in the FIFA U-17 World Cup.