Eaglets pocket $7,000 each for beating Mexico 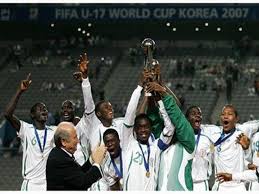 Members of victorious Golden Eaglets that won the 15th Edition of the FIFA U-17 World Cup after beating the defending champions, Mexico, 3-0 0n Friday received a winning bonus of $7,000 each for their efforts.
The Minister of Sports, Mallam Bolaji Abdullahi, made this possible as he augmented the bonus from the quarter-final stage to the final of the competition, when he agreed to double the amount paid by the cash-strapped Nigeria Football Federation, which has said it loud and clear that it is financially handicapped.
The breakdown of the bonuses is a follows: each member of the Golden Eaglets was paid $500 each for the three group matches played, while they received $1,000 each for the second round match instead of $750 and $2,000 for the quarter-final match instead of the initially agreed $1,000.
Also in the semi-final match, the players received $4,000 instead of the normal $2,000 while they were paid $7,000 for emerging world champions after winning the final match.
The total amount paid as bonuses to the 21 players excluding the coaches bonuses was put at N47 million.
The Chief Coach of the team, Manu Garba, received twice of the bonus of the players.