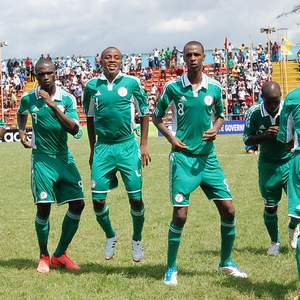 Nigeria’s U-17 National Team, Golden Eaglets, will depart Lagos on Wednesday morning for the 10th CAF African U-17 Championship, which begins on Saturday.
The team, which returned from a four-week, final training programme at the Aspire Academy for Sports Excellence, Qatar on Sunday, will fly into Casablanca aboard a Royal Air Maroc airplane and then move to Marrakech, venue of their Group B matches.
Nigeria, three-time world champions, last participated at the African U-17 finals in Togo in 2007, which they won, and then followed up with triumph at the FIFA U-17 World Cup finals in Korea Republic.
Tournament organizers will take over responsibility for the Nigerian squad once they land in Casablanca on Wednesday morning.
On Friday, the Confederation of African Football will conduct the Magnetic Resonance Imaging examination on all the participating teams.
The competition opens on Saturday afternoon with host Morocco taking on Gabon at the Mohamed V Stadium in Casablanca, while Tunisia will take the pitch against debutants Botswana immediately after.
Nigeria and Ghana, with Africa’s most illustrious record in international youth football, will clash in the most anticipated match of the group phase in Marrakech on Sunday evening, after Cote d’Ivoire and Congo-Brazzaville would have done battle at the same venue.
The Eaglets also play Cote d’Ivoire on April 17 and Congo-Brazzaville on April 20 in the group phase.