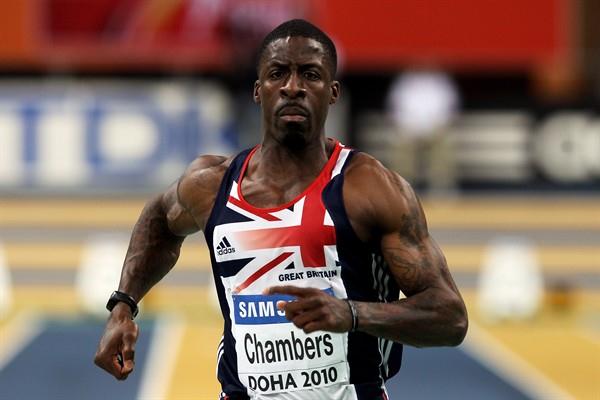 Share
Facebook Twitter LinkedIn Pinterest Email
Dwain Chambers has come out of retirement at the age of 40 for this weekend’s British Indoor Championships.
Chambers, who retired in 2017, has trained over the winter and clocked a best time of 6.70sec over 60metres but will be up against athletes half his age in Birmingham.
Reece Prescod’s 6.53sec is the national best this season, leaving Chambers, who tested positive for steroids in 2004, an outside bet to force his way into next month’s European Indoors team in Glasgow.
Prescod is not running, leaving double European champion Richard Kilty and Nethaneel Mitchell-Blake has Chambers’ main competition.
Chambers was stripped of his European 100m gold from 2002 and 2003 World Championships relay silver medal wan banned for doping.
Following his two-year suspension from athletics, Chambers attempted to kickstart a career in American football and again in 2007.
He also had an unsuccessful trial with rugby league outfit Castleford Tigers in 2008.
Birmingham British Indoor Championships Dwain Chambers Retirement
Share. Facebook Twitter Pinterest LinkedIn Tumblr Email