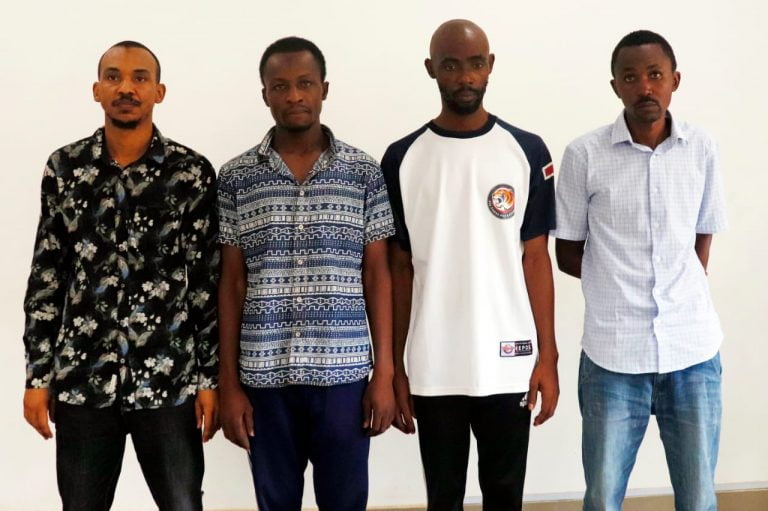 Dubai, United Arab Emirates-based Bello Ahmed has been arrested after returning to Nigeria just to kidnap his fiancée, Hannah Queen, for ransom at the Apo Estate area of Abuja.

The 25-year-old returnee was alleged to have staged the kidnapping to collect money from Queen’s parents who are wealthy.

Aside from Ahmed, others alleged to have participated in the kidnap are Ibrahim Mohammed, 30; Bilyamiyu Mohammed, 30; and Uche Daniel, 30.

The suspect and his partners-in-crime were eventually arrested by the Intelligence Response Team of the Nigeria Police.

The Police said that the gang members would be charged with criminal conspiracy and kidnapping.

Queen was said to have been kidnapped on March 26, 2022 at Suniville Estate, Apo.

Following her abduction, her distraught family members reported to the IRT Headquarters at Guzape.

The complainant, identified as Assistant Commissioner of Police Yusuf Sanni, is said to be an uncle to Queen.

The police said: “The kidnapped victim is a lawyer and daughter of a renowned diplomat.

“She was engaged to Ahmed who lives in Dubai United Arab Emirates and is a friend to her parents.

“It was gathered from Police investigations that Ahmed had married a wife and had two children in Dubai before relocating to Nigeria to conspire with a kidnap gang to abduct his fiancée for ransom.

“He rented an apartment at the Apo Estate upon his relocation to Nigeria based on the relationship.

“He brought in the other three gang members into the three bedroom bungalow apartment three days before the kidnap was arranged.

The victim was relaxing in his sitting room when the kidnappers came and kidnapped both.

After the gang took him and his would-be spouse into captivity, he made her believe that he had sent N10 million to the kidnappers for their release through a fake bank alert.

“But she later found out it was a fraud and then started calling her parents to come to her rescue.”

Ahmed reportedly told the police: “We had expected a total of N50 million as ransom from the parents of my fiancée and that we would each get N10 million.

“My ex-lover put so much pressure on me to marry her and I kidnapped her to raise the money I needed.

“I regret my involvement in the act as I couldn’t get the money I expected as ransom.

“I had planned to marry the lady as a second wife in November 2022, but I decided to do the marriage ceremony in July this year to forestall the possibility of her marriage to a newfound lover.”

Police said that exhibits recovered from the suspects included a hack saw, two masks, a beret, one masking tape and one iPhone.

Other exhibits said to have been used by the suspects for the kidnapping and still missing from the house of Ahmed included three toy guns and an axe.

The Investigating Police Officer, Sergeant Law Okeke, said that the suspects were culpable in the crime and that they had made useful statements to assist the police in the investigation.

The Inspector-General of Police, Usman Alkali Baba, directed the Police authorities on the imperatives of diligent prosecution of the matter in court for justice to be served on all the suspects involved.