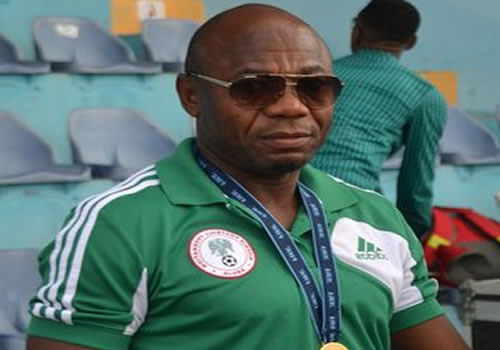 After thrashing Sia-One academy 4-1, Dabo Babes 5-0 and a Kaduna State selected side 6-2 in test games, football fans left the FIFA Goal Project, Abuja disappointed on Thursday morning as the Flying Eagles failed to assuage their thirst for goals against Nigeria National League side, Dreams FC.
For the first time in four matches, the Emmanuel Amuneke-tutored side failed to find the back of the net, but they gave the fans plenty to savour in 90 minutes against a very good Dreams FC of Makurdi.
Thursday’s match, according to Coach Amuneke, provided the stiffest test for his boys but he admits that it came at the right time as the team intensifies preparation for their May 22 Africa U-20 Cup of Nations qualifier against Burundi in Bujumbura.
Team captain Kelechi Nwakali is nursing a minor injury and so did not play any part in Thursday’s match, but others like Wolfsburg of Germany’s latest recruit, Victor Osimhen, and Samuel Chikwueze started and gave a good account of themselves against a very resilient Dreams FC, who were also using the match to prepare for their first match of the NNL season against Supreme FC in Abuja.
Osimhen had two shots on goal from long range.
Chukwueze fired a weak shot from just outside the area, while Kingsley Michael saw his effort go wide from the edge of the box.
Dreams FC also had their chances, but Flying Eagles goalkeeper, Akpan Udoh, was always up to the task thwarting all their efforts.
It ended 0-0 at full time and left former NFF board member, Dominic Iorfa, who is the owner of Dreams FC, satisfied with the performance of his boys.
Iorfa said: “We heard stories of how ruthless this Flying Eagles team can be on their day, but we came here determined that we would not be beaten and we achieved just that.
“We hope to improve on our performance in this game to show Supreme Court FC that Dreams FC is gunning for top flight football next season.”
Amuneke admitted it was not an easy game for his boys but he is more interested in how they play and how well they have learnt, not necessarily the outcome of these test games.
He said: “We will continue to learn until we become perfect.
“We need these games to test our readiness for the match against Burundi and hopefully after two or more of such matches, we can conveniently say we are ready to go.”
The Flying Eagles will tackle their counterparts from Burundi in the first leg of the Africa U-20 Cup of Nations qualifying fixture on May 22 in Bujumbura, while the second leg will take place in Nigeria two weeks after.