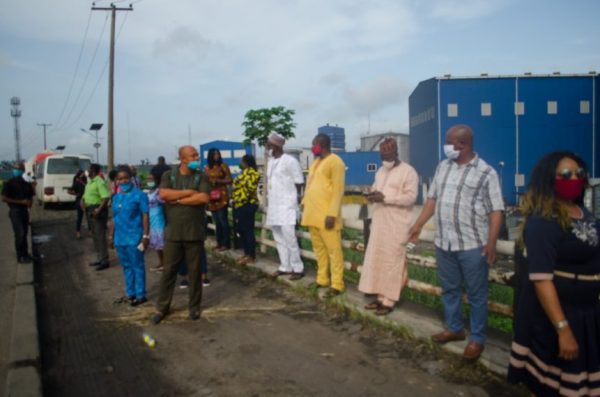 Dockworkers at the Rivers ports on Friday commended President Muhammadu Buhari for his commitment to due process, which has led to reopening the BUA Terminals shut down last year by the Nigerian Ports Authority in a move challenged by BUA at the time and decried by maritime stakeholders.

The workers in their numbers took to the docks of Port Harcourt to thank key stakeholders for their timely intervention in the crisis between the BUA Ports and Terminals and the Nigeria Port Authority, which rendered business activities at the terminal B void.

Addressing the dockworkers at the rally, Comrade Waite Harry, a National Trustee of the dockworkers branch of the Maritime Workers Union of Nigeria, praised the President for his commitment to due process, which ultimately led to the withdrawal of the notice of termination issued to BUA Ports and Terminals in line with the concession agreement.

The Government also directed both parties to resolve all outstanding issues in line with the concession agreement, discontinue the pending arbitration in London, and reopen the BUA terminals immediately.

According to Harry: “This action has saved the jobs of many dockworkers whose only source of livelihood come from working here.

“The resolution of the crisis has changed our status from being ‘prisoners of hope’ due to untold hardship dockworkers faced over the inability of ships to berth at the BUA terminals.

“We must also appreciate the Management of BUA Ports and Terminals who continued to support us monthly throughout this period.

“We are happy that we can now return back to our work through this gesture by the FG, which will also bring economic prosperity to the state and the nation in general.

“I hope that all outstanding issues can now be resolved by both parties amicably.”

It will be recalled that in 2019, the NPA issued a notice of termination to BUA Ports and Terminals, concessionaires of the Rivers Ports Terminal B, in a move that BUA said was illegal and ran contrary to the concession agreement.