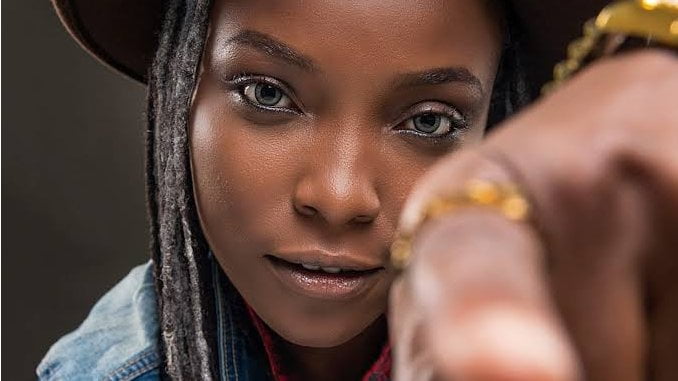 Popular Disk Jockey, Obianuju Udeh, popularly known as DJ Switch, has pleaded with the International Criminal Court to investigate the Lekki tollgate shooting, which has led to conflicting reports on the number of casualties.

DJ Switch addressed the office of Fatou Bensouda, the ICC’s prosecutor, in a virtual event on Thursday after the announcement of a preliminary inquiry into the alleged crimes committed during the #EndSARS protests.

The DJ alleged that the present government will rather silence and kill its citizens than be guided by their concerns and cries.

She also pointed out that this same government froze the accounts of protesters and seized passports but cannot trace the accounts that sponsor terrorism.

Recall that The Eagle Online reported that fews weeks after the Lekki tollgate shooting, DJ Switch was alleged to be seeking for asylum in Canada.

“From President Muhammadu Buhari downwards, they are all SARS.

“This is a government that would rather silence and kill its citizens rather than be guided by their concerns and cries; hide COVID-19 palliatives, that were donated, rather than feed its people.

“One that would rather spend quality time with his cows rather than address its citizens.

“The same government chose to inject rogue elements into peaceful protests rather than protect its people.

“Yet it chose to cuddle terrorists.

“It is the same government that froze the accounts of protesters and seized passports but cannot seem to trace the accounts that sponsor terrorism.

“It states in the constitution that the security and welfare of the Nigerian people is the primary purpose of the government, but on the 20th of October 2020, the Nigerian Army sanctioned by the government stormed the Lekki tollgate in the first wave of assault.

“There was no warning, just guns blazing.

“We were forced to have a crash course on medical procedures, attempting to extract a bullet from the leg of a protester until one ambulance came from the back.

“So, please tell me, what then was their intention if not to kill us?  At this point, we had counted 15 bodies.

“A few hours later came the second wave of us of assault by the Nigerian police with the same modus operandi, killing and injuring those of us left at the tollgate.

“The same police also shot at us the next morning. This is just one incident. There is Obigbo. There is Nkpor.

“There is Zabamari and more. The Nigerian authorities under the poor, corrupt, and misguided leadership of President Buhari down to his cohorts: Governor Jide Sanwo-Olu, General Tukur Buratai, Brigadier Taiwo, FO. Omata, Lai Mohammed, and many more have all tried severally to deny these events while contradicting themselves.”

Rod Rastan, the Legal Advisor to the Office of the Prosecutor, also revealed that they  believe that crimes have been committed across multiple fronts.

Rastan also revealed that they had been focused on alleged crimes by Boko Haram, but in subsequent years, have updated it to include their findings with respect to the Nigerian security forces.

He said: “ICC has been examining what’s been going on in Nigeria for a long time.

“We call it a preliminary examination. It’s a stage where we’re determining whether we should open investigations.

“It didn’t take long to conclude that crimes were committed within the court’s jurisdiction.

“Our conclusion was focused on alleged crimes by Boko Haram but, in subsequent years, we’ve updated it to include our findings with respect to the Nigerian security forces.

“We’re supposed to step in if the national response isn’t effective or genuine.

“We have always sought to offer threats of the ICC intervening in order to create momentum domestically.

“If they don’t act to that, we should act.

“We said we were likely to conclude our assessment this year.

“And at the end of it, we have indeed confirmed there is a basis for the court to proceed because the national response doesn’t correspond to what we’re looking at now.

“We believe that crimes have been committed across multiple fronts, almost every crime within the jurisdiction of the court appears to have been committed in one formula bar or other in relation to war crimes and crimes against humanity under our statute.

“We are continuing forward planning for investigations.

“We have a limited capacity, investigating multiple situations around the world.

“We only have 80 investigators.

“It’s not that we’re looking at an excuse not to do things, but that we also are emphasizing that we also need support from state parties and from other stakeholders to also help the court have the means to deliver what it wants to do.

“What this means for Nigeria is that the prosecutor will make some decisions on how to roll out investigations.

“If the means do not come, then the prosecutor may have to, for example, decide to terminate some lines of inquiry or complete activities that are ongoing in order to allow the capacity of the office to open investigations relation to Nigeria.

“These are pragmatic considerations. It doesn’t mean that the office will not proceed with investigations.”

Reacting to Rastan’s comment, DJ Switch added: “This government continues to fail in doing its duty as what I’d have called an elected government if that was not riddled with corruption itself.

“I urge you as members of parts of the global governing body to take swift action in ensuring justice is served to Nigerians through your investigations.

“I believe you will find ample evidence to bring charges against the elements in the Nigerian government.

“Please do not continue to place us on the back burner or say we are not a priority.

“Do not turn a blind eye to a nation with immense potential to be on the world stage if only these potentials are harnessed and not killed off.

“It is evident the state of Nigeria has failed, our leaders too greedy too corrupt, and quite frankly unequipped intellectually, mentally, and physically to protect Nigerians or move the nation anywhere.

“If it is indeed true that the first lady of Nigeria, Aisha Buhari, can relocate to Dubai citing insecurity in the presidential Villa, the most secure building in Nigeria, then I asked where do we the average Nigerian go?

“I can assure you millions of Nigerians are willing to help provide all you may need to reduce the potential burden on this request.

“Nigeria is sitting on a keg of gunpowder because of all the things that we have been deprived of.”