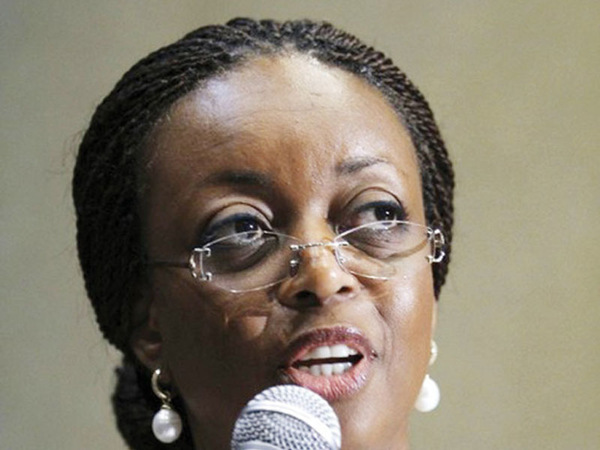 A Federal High Court in Lagos on Tuesday fixed February 16 to deliver judgment in a suit by the Economic and Financial Crimes Commission seeking forfeiture of funds linked to a former Minister of Petroleum Resources, Diezani Alison-Madueke.
Justice Muslim Hassan fixed the date after hearing arguments from counsels representing parties in the suit.
It would be recalled that Justice Hassan had on January 6 issued an interim order of forfeiture of the sum of $153.3 million to the Federal Government following an exparte application by EFCC seeking similar relief.
Alison-Madueke has, however, denied ownership of the money.
The EFCC had initiated the exparte application seeking an interim order for the temporary forfeiture to the Federal Government of the sum, which it claims is linked to Alison-Madueke.
The court had also issued 14 days to any interested party to appear and prove the legitimacy of the monies, failing which the funds would be permanently forfeited to the Federal Government.
At the resumed hearing of the case on Tuesday, Charles Adeogun announced appearance for Dauda Lawal, an Executive Director of First Bank, who is joined as respondent in the suit.
On the other hand, Rotimi Oyedepo announced appearance for the EFCC.
Oyedepo informed the court that in line with its interim orders of January 6, the EFCC had served same on the respondent (Lawal).
He also informed the court that the order was also published in the Independent Newspaper of January 12 in compliance with the orders of the court.
In response, Adeogun confirmed the position and added that he had filed a counter affidavit deposed to by Lawal challenging the said forfeiture orders.
Arguing his application, he urged the court to issue an order directing a refund of the sum of N9.08 billion to his client on the grounds that same was obtained by coercion.
He argued that before such forfeiture orders can be made, two essential elements must be satisfied, namely: “That the property in question is unclaimed and that such property or funds forms proceeds of an unlawful act.”
Adeogun said: “We became aware of the forfeiture order when the interim order was served on us; my client was never confronted with these sets of facts during his incarceration at the EFCC.
“After service of the orders, I requested for the statement of my client to the commission, but same was never given to me.”
Adeogun argued that his client admitted having received the sum of $25 million in clear dispensation of his duties, but was coerced by the commission to further admit receiving a total of $65 million.
According to him, the sum of $40 million was, therefore, taken as an overdraft from his bank to offset the alleged extra sum.
He, therefore, urged the court to order the immediate refund of the sum to his client.
In his reply, Oyedepo submitted that the tenure of Section 17 of the Advanced Fee Fraud and other related offence Act makes a property, which is reasonably suspected to be proceeds of crime, forfeitable to the Federal Government.
Oyedepo said: “Going by the facts and circumstances of this particular case, can it be said that the sum of N9.08 billion, which is the naira equivalent of $40 million, was not reasonably suspected to form proceeds of a crime?’’
He argued that paragraph 4 of the applicant’s reply affidavit showed a meeting of the minds of some members of staff of the Nigeria National Petroleum Corporation as well as the respondent to launder funds.
He said: “My lord, paragraph 4 of our reply affidavit shows a meeting of the minds of one Gbenga Komolafe, former group MD, Crude Oil Marketing Division NNPC; Prince Haruna Momoh, former Group MD, Petroleum Product Marketing Company; Umar Farouk Ahmed, Group MD Nigerian Product Marketing Company; as well as Dauda Lawal to launder funds on behalf of former Petroleum Minister, Diezani Allison-Madueke.
“It will amount to contesting the obvious for Lawal to argue that he had no knowledge of the said sums.”
Oyedepo argued that it was uncommon for a law enforcement agency like the EFCC to detain a person in its custody in perpetuity, without an order of the court, adding that the statement of Lawal was lawfully obtained.
He said: “The respondent was duly cautioned before he voluntarily made his statement at the commission, and his lawyer even appended his signature further attesting to the fact that the statements were obtained voluntarily.
“So having freely volunteered a statement, he cannot urge my lord not to attach full probative value to his statement.
“I submit that the appropriate order in the circumstance is for the court to order a final forfeiture of the sum of N9.08 billion already surrendered by the respondent, to the Federal Government.”
He also urged the court to order the forfeiture of other sums to which no claim had been laid.
Oyedepo said: “I urge the court to so hold.”
After listening to the submission of counsels, Justice Hassan fixed February 16 for judgment.