Rep Committee to commence consideration of queries to MDAs

Kajogbola Jimoh, Federal Controller of Works in Kogi State has assured Nigerians that the Ajaokuta-Itobe bridge is intact and structurally stable against insinuations that it has divided into two and no longer passable.
Jimoh gave the assurance during an on-the-spot assessment of the bridge in company of the officials of the Federal Roads Maintenance Agency on Friday at Ajaokuta.
He said that the bridge only required routine maintenance.
Jimoh said the only issue was the missing 40mm electrometric rubber base plates covering expansion joints which had chopped off as a result of vehicular movement on the bridge.
He said the exposed gaps notwithstanding, the bridge was stable structurally without excessive vibration, adding that the separation gaps between the joints were designed for thermal expansion.
He said: “So it is as designed.
“If you measure the expansion where there is existing rubber and the one that has lost the rubber, they are still the same, a proof that the bridge is not moving.
“I am assuring Nigerians that this bridge is stable.
“Articulated vehicles are passing through it as you have seen.
“They don’t need to entertain any fear.”
Jimoh said that the rubber base plates required replacement from time to time because they were not steel or concrete.
He, however, noted that when experimented with steel plates, the plates were removed before morning by some unpatriotic Nigerians.
He said: “Itobe bridge is a very special bridge in Nigeria.
“It links the South South, South East and the Northern part of the country.
“In the last 30 minutes that we have been on the bridge, we have seen its behaviour.
“The bridge is structurally stable the vibration is not excessive.
“It is designed to vibrate because it is only then that it can deliver.”
The Federal Controller of Works, however, hinted that contract for the maintenance work on the bridge was underway.
Jimoh said: “I have discussed with the Director, Bridge Design in the Ministry and he has assured me that by next week, the contractor would move to site.
“So by next week, the contractor will start work on this bridge.”
The News Agency of Nigeria reports that the video of the expansion gap on bridge went viral on social media, warning motorists of the dangers inherent in plying it.
The video went viral after it was used by instablog9ja, an online news platform.
Photographs released on Saturday by Hakeem Bello, the spokesman of the Minister of Works and Housing, Babatunde Fashola, showed that big iron rods have been placed on the opened part of the bridge initially covered with the steel plate as mentioned by Jimoh.
But only one side appeared well covered. 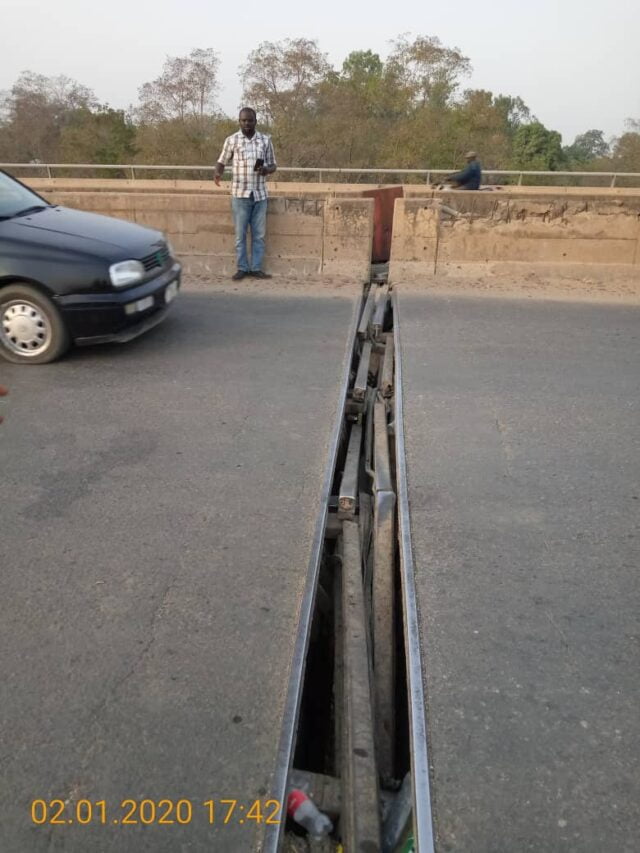 Rep Committee to commence consideration of queries to MDAs