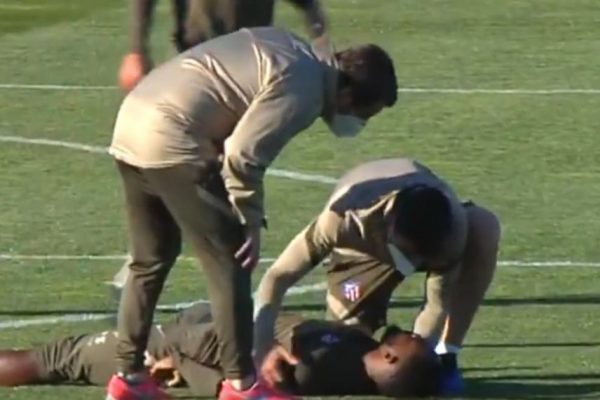 Worrying video footage of the French international collapsing during a portion of training open to the press has circulated on social media.

Teammates rushed to the aid of Dembele, who was quickly put into the recovery position and attended to by medical staff.

A stretcher was retrieved from a nearby ambulance, but the player then appeared to regain consciousness before being slowly helped to his feet.

Spanish publication Marca cite sources at Atletico who report that the former Celtic and Fulham forward suffered a “slight drop in blood pressure” that caused him to faint.

Marca’s report added that Dembele – who confirmed he was fine while being filmed driving away from Atletico’s training ground after the scary incident – will undergo further medical examinations and is under observation.

His vital signs are said to be “absolutely normal”, meanwhile.

Dembele joined Atletico from Ligue 1 outfit Lyon in January on an initial loan deal that includes the option for a €33.5 million permanent summer transfer.

The 24-year-old is yet to score or indeed start for his new club, who sit top of LaLiga with a four-point buffer to nearest challengers Barcelona with 10 matches remaining in 2020/21 – starting with a tricky trip to fourth-place Sevilla on Sunday.

Dembele tested positive for COVID-19 last month and has also endured an injury-plagued start to life in Spain, making just four appearances from the bench under Diego Simeone.