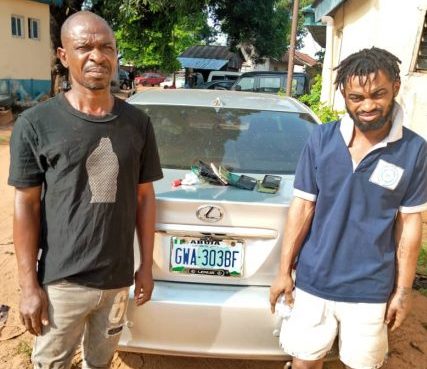 Operatives of the Ozoro Division of the Delta State Police Command in conjunction with some vigilantes on Tuesday stormed a criminal hideout at Aradhe community, where one Oghenefegor Francis, male, 28, was arrested.

Francis was said to have been identified as the leader of a six-man gang who allegedly kidnapped one Williams Aduenwomah on March 27, 2021.

Four of the gang members had earlier been arrested, according to a statement by the police spokesman in the state, DSP Edafe Bright.

Bright also said that a team of operatives from the ‘A’ Division, Warri, on Tuesday trailed and arrested one Nnachi Cypraim ,‘male’ who had been named as a prime suspect by the gang leader of an armed robbery syndicate, one Gift Famous, ‘male’, popularly known as Bubune.

Bubune had earlier been arrested by men of the command.

Cypraim was arrested at Shoprite Warri in connection with a series of car snatching at gunpoint. He allegedly confessed to the crime for which he was arrested, and also identified Bubune as being his friend and inmate at Oko Prison Benin.

The suspect further led the team to Otokutu where a snatched/stolen gold coloured Toyota Camry car with Reg. No. FKJ 86 ET was recovered.

The car had however been fraudulently changed to black colour.

Other exhibits recovered include a forged International Driver’s Licence with the name and picture of Bubune on it.

Edafe further disclosed that on April 20, 2021, policemen from ‘A’ Division, Asaba, while on ‘stop and search’ operation intercepted one Lexus 330 with Registration No GWA 303 BF, which on sighting the police quickly turned and sped away.

When the police patrol team chased and intercepted it, the occupants: Kenneth Edemba, 52;  and Chukwuemeka Edemba, 25 were arrested, and on them were found one live cartridge, one sachet of Tramadol and 14 different phone patches.