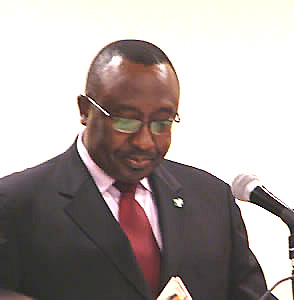 Abdullahi Ohoimah, an elder statesman at the National Conference, has called for “radical legislation” that will ensure timely passage and implementation of national budget.
Ohoimah made the call on Tuesday when he contributed to President Goodluck Jonathan’s address at the inauguration of the conference.
He said that delay in the passage of budget by the National Assembly and poor implementation by the executive had led to abandonment of projects worth trillions of naira.
He said: “The implication of this is that the national budget that is supposed to deliver realisable projects, now delivers abandoned project all over the country.
“How can a country develop when the capital component of its national budget is abandoned?
“I will want to see recommendation from this conference that will provide for radical legislation that will make it an impeachable offence for the executive not to lay budget on time.”
Ohoimah also called for legislation that would make provision for the dissolution of the National Assembly if the budget was not passed before December 31 of every year.
He said: “A provision that makes it extremely very difficult for the executive and, indeed, by extension the Ministry of Finance, to release funds in January and mop it up by the end December 31.
“There should also be another legislation that will compel Ministries, Departments and Agencies not to embark on any new project if existing ones are not completed.”
Meanwhile, Bayo Ojo, a delegate representing the North Central, has stressed the need for free and compulsory primary and secondary education to tackle the high rate of illiteracy in the country.
Ojo said that a recent report released by UNESCO indicated that one-third of Nigerians could not read and write.
He added: “The consequence of this is mind boggling. “It means that our people will perpetually remain in bondage.
“So, we need to emancipate them.
“I, therefore, recommend that as part of our recommendations, we must have free and compulsory primary and secondary education in this country.”