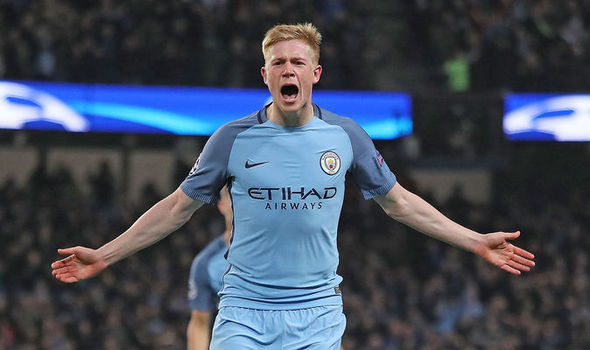 Manchester City manager, Pep Guardiola, on Friday said Kevin De Bruyne and Raheem Sterling were available for selection for their English Premier League opener against Arsenal on Sunday.
He said this was possible after the pair returned in perfect condition from the 2018 FIFA World Cup in Russia.
Belgium playmaker, De Bruyne and England forward, Sterling, played an influential role in Manchester City’s title triumph last season.
The duo only returned to training on Monday after helping their national teams progress to the semi-finals in Russia in July.
“They are available,” Guardiola told a news conference ahead of Sunday’s match at the Emirates. “They arrived quite well”.
He added: “Raheem and Kevin had three weeks off after the World Cup, which is not too much time (for pre-season) but they both arrived in the perfect way.
“Sterling was fit after three or four days — he is not a big guy. (Maintaining) his physical condition is easy. Kevin arrived in the perfect way.”
Manchester City bolstered their attacking line with the club record signing of Riyad Mahrez but were not as active in the transfer window as they were this time last year.
But Guardiola said he has faith in his current squad that has evolved over the last two seasons and looks comfortable with the favourites tag.
He said: “For nine years, every season, I have lived with this situation and it’s no problem. Every season we are the favourites.
“Our target is: try to win as much as we can and in April and May, we will see (the outcome). If we are good and consistent like last season, we have a good chance.”
Manchester City are unbeaten in their last five league encounters with Arsenal who begin a new era under manager, Unai Emery, following last May’s departure of long-serving manager, Arsene Wenger.