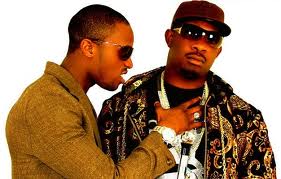 Former Mo Hits Records’ partners, D’banj and Don Jazzy, have finally reconciled almost two years after the business partners went their separate ways over irreconcilable differences.
The celebrated artistes shocked many with their surprise performance on Saturday, at D’banj’s younger sister’s wedding, Taiwo Oyebanji.
Taiwo, the former Mo Hits Records Accountant hooked his better half, Dotun Ojuolape, the Cool FM presenter at a high profile wedding which took place at the Grandeur Event Centre on Billings Way, Oregun, Lagos state.
D’banj and Don Jazzy’s surprise performance would be the first stage performance after they both sheathes sword to move on with their lives.
They however rocked the wedding with their hit tracks such as Endowed, Fall In Love and Suddenly to the admiration of many that attended the superlative