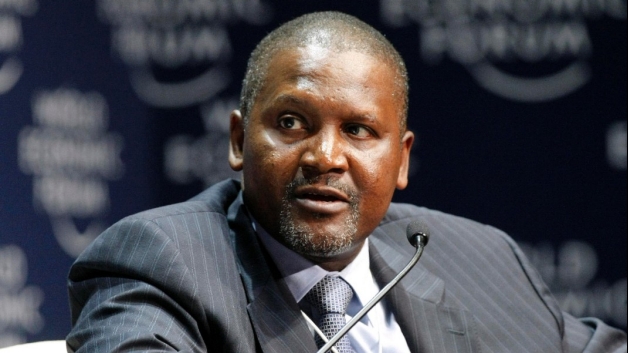 The President of Dangote Group of Companies, Alhaji Aliko Dangote, said the group would invest $16 billion to create various businesses in Nigeria and other African countries in the next four years.
Dangote made this known on Thursday in Abuja at the plenary of the ongoing World Economic Forum on Africa.
The theme of the forum is: “Forging Inclusive Growth, Creating Jobs.”
Dangote said that the investment programme would translate into creation of no fewer than 180,000 jobs in Nigeria and the continent.
He said: “We are investing a total of $16 billion (N2.6 trillion) in the next four years to create a lot of businesses in refineries, petrochemical and to make Nigeria self-sufficient in fertiliser.
“We are building a fertiliser plant, which is going to be 2.8 million tonnes, and part of it will be for export because it is more than what Nigeria requires.”
Dangote, who said that the company was focusing on agriculture to address the problem of unemployment in the country, said that the group was partnering the Federal Ministry of Agriculture to achieve the goal.
He said: “The most important aspect of our business today is the agricultural side, of which we are not doing before.
“What we are doing right now is that we are partnering the Ministry of Agriculture to do a million tonnes of rice.
“We have got a letter that 60,000 hectares of land is available in Niger State, and in Edo we have 64,000 hectares.”
The business icon, who stated that the only way to stop the terrorism challenge, especially Boko Haram, in the country, was to create jobs, adding that his group of companies had put measures to support the government in that regard.
He said: “We decided to invest a total of $two billion in sugar by making Nigeria self-sufficient in sugar.
“We are going to six states in the North East.
“We are going to Taraba and Adamawa.
“In the North West, we are going to Kebbi, Sokoto and Jigawa.
“And then in North Central, we are going to Kogi and Kwara.
“But when you look at all these after investing in rice and sugar, we are going to have an opportunity to create 180,000 jobs.”
Dangote cautioned against looking at the negative side of the economy, saying there were opportunities waiting to be exploited.
He noted that government had done a lot to improve investment environment in the country, adding that there was the need for Nigerians to be creative and make use of available opportunities in the economy.
He called on Africans to invest their money in the continent rather than saving it abroad.
Dagote said: “The biggest challenge we are facing today is that some of us here in Africa will rather keep the money abroad than invest in Africa, but by doing that you are not creating confidence.
“You have to invest your money as an Africa to create confidence for foreign investors to bring in their money.”
The Executive Direct of Oxfam, Winifred Byanyima, said that Africa was still lagging behind because its growth was mainly from oil and gas and not much from other sectors.
Byanyima said: “This is a serious problem for Africa because Africa is the second most unequal continent in the world, next to South America.
“Six out of 10 unequal countries in the world are here in Africa and this inequality is widening in the continent.
“If we are going to have growth that is more shared, we must do a few things.
“African people must be provided a proper and adequate education and health facilities and if we don’t do this, growth will continue to rise and inequality will continue to expand.”
Byanyima said that there were adequate resources in Africa to cater for its needs in education, health and others, adding: “Because of illicit financial flow in the continent, it loses at least $63 billion annually.”
She said that this money would have been channeled to the provision of adequate health and education facilities in the continent.