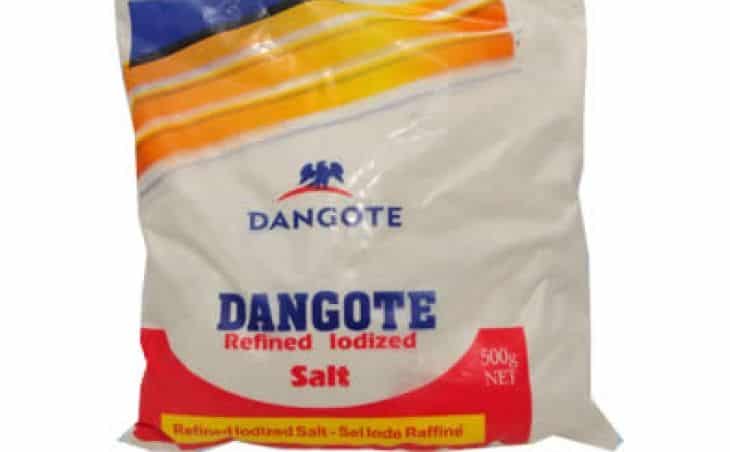 The management of Dangote Salt and the National Agency for Food and Drugs Administration and Control have expressed their readiness to collaborate and corroborate efforts to rid the food market of unwholesome practices by unscrupulous traders.
The two managements resolved to work together closely to monitor the quality of products that are delivered to the market after ascertaining that the right quality of products are taken out of the factory.
The management of NASCON Allied Industries Plc, led by the Managing Director, Paul Ferrer, and the Dangote Group’s Chief Corporate Communication Officer, Anthony Chiejina, had paid the Agency’s Director-General, Yetunde Oni, a courtesy visit in her office in Lagos.
Ferrer had expressed satisfaction at the efforts of the Agency leadership to sanitise the food market by getting rid of fake and substandard products and turning the heat on the perpetrators, adding that the efforts had paid off.
He however explained that he observed an infringement on the directives of the Agency on the packaging of industrial salts by some undesired elements.
According to him, contrary to the directives of the NAFDAC that industrial salt should only be packaged in 50kg, his organization observed the existence of the industrial salt in small sizes as 5kg, 10kg, 15kg and 20kg.
Ferrer reasoned that someone somewhere has been has been repackaging the 50kg size to smaller sizes and supplying to the markets, a development he said is dangerous as people may be misled to be buying the industrial salt in place of the table salt, which comes in the smaller sizes.
The Dangote salt boss therefore enjoined NAFDAC to help see to the development as the unsuspecting consumers might not know the difference between the iodised table salt and the industrial salt
In her response, Oni thanked the NASCON management for the confidence reposed in her Agency.
She said the observation was one of the many infringements the her agency has been battling tooth and nail and that the NAFDAC management would not relent in the fight against every infringement to see that the people have access to right quality products always.
She advised companies in the food sector to have a Post-Market Surveillance unit in their establishment for self regulation of their market to make enforcement easier for NAFDAC.
According to her, investigations have shown that right quality products are taken out of the factory for distribution into the market but on getting to the market, some products quality would have been diluted and repackaged as the case may be, suggesting that the repackaging and dilution of quality happened along the value chain by unscrupulous elements.
Oni said the Agency would not accept a situation where some criminals would be clandestinely diluting genuine brands, adding that it amounts to counterfeiting and which must be dealt with, hence the need for primary self regulation by the companies through the PMS unit to collate intelligence and hand them over to NAFDAC for enforcement.
She said: “We are solidly behind the food sector, the sector is dear to us.
“We can do mop-up as we did in juice sector, we will go on random sampling, to ascertain the product quality and the sustenance of the quality.
“The establishment of the PMS unit is the way to go, to actually tackle this menace.
“The value chain has to be monitored.”
The NAFDAC boss called on the collaboration between the agency the food producers and help retool the Agency laboratory and in the area of provision of operational vehicles to make the Agency more effective, because Nigeria has a large market.
In his remark, Chiejina thanked the Agency for the readiness to act fast and also promised that the Dangote Group would be willing to assist the Agency in getting some operational equipment will make it more efficient and effective to carry out its mandate.
Dangote Group, according to him, is passionate about giving the people the best quality possible in all its arrays of product and would go to any length to ensure nothing detract from the quality produced and that taken to the market for the people to consume.