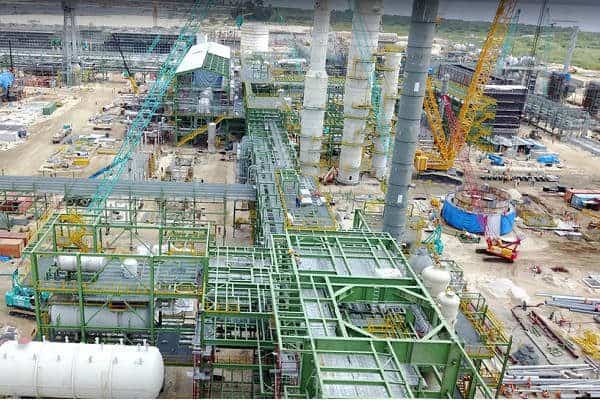 The International Monetary Fund, the global financial watchdog, is projecting that Nigeria’s Dangote Refinery would provide an elixir for the country’s economy when it is completed and starts production by 2022.

In its latest report on Nigeria’s economy, the Fund raised the hope that the start of production from the refinery, solely owned by Africa’s richest man, Aliko Dangote, could help Nigeria improve its Current Account Balance.

The IMF wrote in its Article IV report on Nigeria’s economy released on Monday: “On the upside, the Dangote refinery, if commencing production in 2022 as planned, could meet the full demand for domestic consumption of refined petroleum products – which are almost all imported at present – thereby improving the CA balance.

“With crude oil for local refining not subject to the OPEC quota, the refinery also has the potential to catalyze more domestic crude oil production and boost GDP growth.”

Many experts have also projected that the refinery, which may cost Dangote about $15 billion to complete, is capable of helping to save Nigeria huge foreign exchange in fuel importations.

The 650,000 capacity Dangote Refinery is regarded as one of the world’s biggest oil refineries and could end the irony of Africa’s biggest oil producer importing estimated $7 billion of fuel yearly, and instead see it meeting its own needs and supplying neighbouring nations.

Renaissance Capital in a report in 2018 projected that Dangote Refinery has the potential to revolutionise Nigeria’s economy, with its operations adding $13 billion, or 2.3 per cent, to the nation’s Gross Domestic Product.

Dangote Refinery, which is described as Nigeria’s largest-ever industrial project, boasts of a distillation column for separating crude into various fuels at different temperatures that is the largest of its kind in the world.

The 650,000 barrel-per-day refinery is just part of a $15 billion petrochemical complex that will also house a gas processor and the world’s biggest plant for ammonia and urea, which is used in making plastics and fertilizer.

Already, the Fertiliser plants is said to be ready and could be commissioned any time to add to the agricultural revolution not only in Nigeria, but in some parts of Africa to boost the continent’s economy.

The optimism by the global financial watchdog on the potential of Dangote refinery is a victory to the resilient of Africa’s richest man’s contributions to the economic emancipation of Nigeria and the continent at large.

Dangote’s initial plan to enter the refining business was frustrated by government policy flip-flops when in 2007 he bought one of the country’s refineries under the privatisation programme of the then President Olusegun Obasanjo administration.

However, the dream was short-lived as the entire process of privatization was swiftly reversed by the successive government that came after Obasanjo.

Today, Dangote’s quest to play in the oil refining business is gradually coming to pass with the impending completion of the plants in the Lekki Export Free Trade Zone and the accolade from the global financial watchdog.

These include increasing the VAT rate to at least 10 percent by 2022 and 15 per cent by 2025, rationalising the pioneer status system and other tax exemptions and customs duty waivers, increasing rates for excises and broadening the base, developing a high-integrity taxpayer register, and improving on-time filing and payment.

“A significant increase in non-oil revenue is critical to balance the negative revenue impact of the global decline of demand for oil in the long run,” the IMF said in its article IV report on Nigerian economy.

As the recovery takes root and tax compliance improves, efforts will need to be focused on raising tax rates and broadening the tax base to deliver the recommended consolidation.