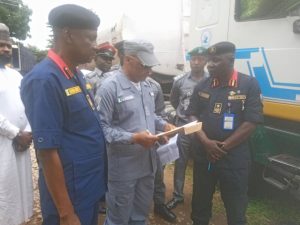 The Nigeria Customs Service Zone “B” Strike Force said it seized N234.4 million goods from smugglers during the second quarter of 2021.

According to him, 5,349 packets of unwholesome drugs, including 758 packets of sex enhancers, 1,708 bags of foreign rice, 307 cartons of Macaroni and Spaghetti were also seized.

He urged the general public and all stakeholders to support the Customs Service to tackle smuggling activities and save the nation’s economy.

The coordinator attributed the seizures to intelligence reports and the commitment of personnel of the task force team.

Olorokoba, who reiterated their commitment to the fight against smuggling in the axis, said that two suspects were arrested and granted administrative bail within the period.

The Customs coordinator handed over the tanker to the Deputy Commandant, Nigerian Security and Civil Defence Corps, Ahmadu Salihu.

Salihu, who heads the NSCDC anti-vandalism unit, commended the Customs Service for the synergy and inter-agency cooperation, saying it would help to safeguard the economy of the country.

He assured that the adulterated petroleum product would be subjected to forensic analysis to determine its safety.