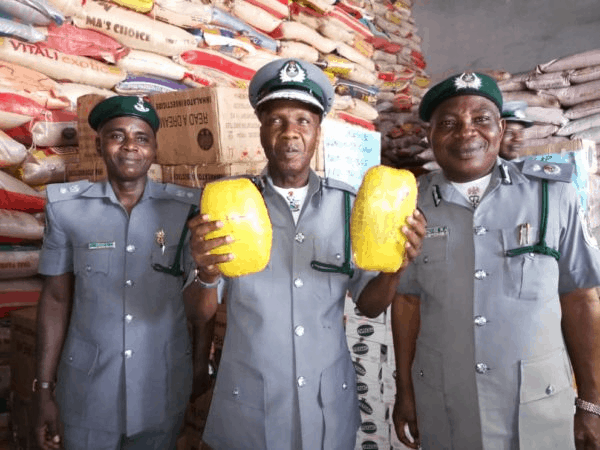 The Seme Command of the Nigeria Customs Service says it intercepted Toyota Highlander padded with 146 wraps of cannabis in spare tyre and other items worth N112.4million in three weeks.
The Customs Area Controller of the command, Comptroller Muhammad Garba, made the disclosure during an inspection of the items in Lagos on Monday.
According to him, a total of 114 parcels of cannabis were found concealed in the jeep and another 32 parcels in other operations with a street value of N1.7million.
Garba said that the driver of the jeep was apprehended along with the seizure, adding that the quantity of the cannabis does not matter as much as the danger it cause to the society.
He said that if the saboteurs were allowed into society, the multiply effect would have rendered majority of the consumers useless and aggressive.
Garba said that it was the duty of security agencies including the press to continue to protect the economy.
He added that customs would handover the seized items to the appropriate authorities after due process had been completed.
He said: “Based on statistics and long term period of interception of vehicle, the illegal smuggling of vehicles through these axis have been reduced.
“In the last three weeks when we had the briefing, there were few vehicles and now we are picking single and it does not mean that they are not smuggling cars but it has reduced.
“Through the joint border post, we also intercepted animal skin which is processed and conventionally called “Pomo” (cow hides) being imported into Nigeria.
“We are going to widen our investigation to ensure that no unhealthy item escape into the country.
“The Command generated the sum of N4.405 billion between January to date, representing 65 per cent of the total allotted target.”
News Agency of Nigeria reports that the seizures made included: 5,204 bags of 50kg foreign rice which was equivalent to 9 trailer trucks of Rice; 10 x 25litres Jerry Cans of vegetable, 13x50kg bags of sugar; 1,078 cartons of poultry products; 55 cartons of spaghetti; and 97 cartons of soap.
He said: “Other items intercepted within the period under review were 59 cartons of insecticides, 65×6 yards of textiles, 17 sacks of used clothes/shoes, four cartons of tin tomatoes, 36 bales of used cloths, 60 pieces of used tyres, 669 packs of PVC carpet/footmats.
“The remaing seized items are: 2 cartons of cream, nine trucks placed on detention due to short payment.
Five vehicles have also been seized, one white Scania (10 tyre) truck was also detained carrying rotten hide and skin.”
The comptroller said the intensified operation of the enforcement unit had drastically reduced smuggling activities.
He said that the achievement recorded so far was with the tacit support of all other sister agencies at the border area.
Speaking on the expired cow hides, the Coordinator, National Agency for Food Drug Administration and Control Seme Command, Dr Nurudeen Audu, said the importers always give false declarations.
He said that this kind of animal skin usually passed through the border post and the importers would tell them that it was leather materials for shoe companies.
He said:  “We discovered that they are preserving the skin with formalin and they will convert it to Pomo and you can see the cow skin is a foreign cow skin.
“We will collaborate with customs and destroy it whenever customs was done with their documentation.”