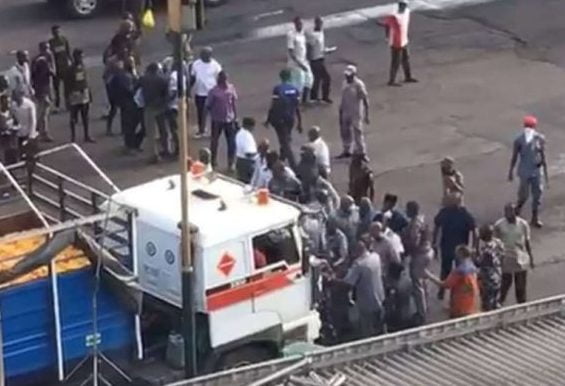 The Nigeria Customs Service, Apapa Command has made a clarification on an alleged attempt to “smuggle” from the Apapa Port vegetable oil loaded in three trucks.
Nkeiruka Nwala, Deputy Superintendent of Customs and Public Relations Officer of the command, said the vegetable oil was directed by the Presidency to be released as palliatives due to the COVID-19 pandemic.
Nwala made the clarification in an interview with the News Agency of Nigeria in Lagos on Sunday.
She said that customs found it strange for the Nigerian Ports Authority to detain the trucks, asking for documentation, which, she noted, was not part of its duties.
“NPA is the landlord and has concessioned what it does to its tenants at the port,” she said.
According to the official, NPA does not account for any container, but provides supervisory role to its concessionaires.
Nwala said: “As far as custody of containers is concerned in Nigerian ports, for example in Apapa – the APM Terminal, the ENL Consortium, the Greenfield, the Dangotes – all of them are custodians of imports coming into their own territories.
“The three trucks of oil are the ones directed by the Presidency to be released as palliatives – two given to the Lagos State Government and one to Ogun State Government.
“The Minister for Humanitarian Affairs made an open handover, which was covered by the media, and she gave customs a directive that as the state governments make their arrangements, they will be coming to evacuate the items already given to them.
“Those were the three trucks that came to the port.
“The trucks had a banner with inscriptions: Ministry of Humanitarian Affairs, COVID-19 Palliative; two trucks had Lagos State on it, while the remaining truck had Ogun State on it, and they were escorted by a team led by a Major in the Nigerian Army.
“We were really surprised at the allegation of smuggling out the trucks from the port.”
Nwala said on daily basis, at least 1,000 trucks got cleared through the port, adding that as far as clearing process and documentation of customs clearance were concerned, NPA had no role to play.
She said records of seized goods, were always sent to customs headquarters and the goods automatically belonging to the Federal Government.
She told NAN that there would not be any release of such goods without a directive from the government.
Nwala said: “The Major came to the Command with documents to collect the items and we gave him papers to go to APM Terminal to pick the items.
“We only got to know what was happening when we saw that NPA stopped them at the gate.
“The Major presented all the documents and they were still arguing.
“It was at that point that they called us and we came to explain who they were.”
NAN reports that on April 16, port activities were disrupted following an alleged attempt by Nigeria Customs Service to move three trucks loaded with vegetable out of the Apapa Port without required papers.
The goods were laden on trucks with registration numbers JJJ 90XQ, KTU495XR and NSR 87 YJ.
NAN.