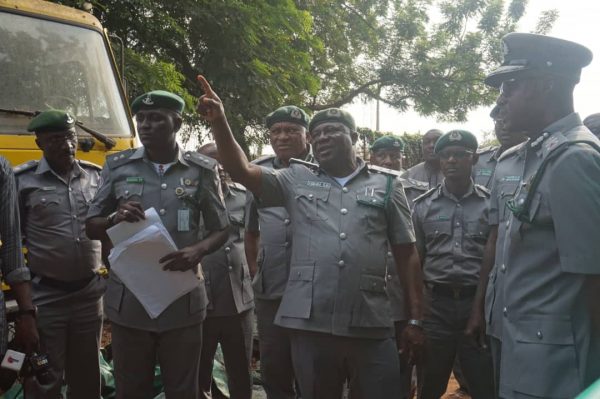 The Customs Service, Seme Border Area Command, says it has arrested a fake corps member suspected to specialise in smuggling banned vehicles into Nigeria through Seme border post.
The Customs Area Controller, Comptroller Mohammed Garba, made the disclosure on Wednesday at a news conference in Seme.
According to him, the arrest was made on Sunday when the suspect was bringing in the vehicle without any document across the border.
Garba said the suspect claimed to be a serving youth corps member.
He said: “He claimed to have the phone of the Inspector-General of Police and many other personalities.
“He passed the border on Sunday; so, as he was coming in the vehicle, the suspect was stopped by our intelligence officers.
“The suspect said that he went to drop somebody in Ghana, but when asked to produce the vehicle document, he said that he used to pass border with phone calls to IGP and others.”
The comptroller said that while crosschecking the vehicle document, it was discovered that the document was reading Primera, while in reality the car was Renault.
Garba said the case would soon be transferred to the police for his prosecution.
The suspect, however, denied the allegations, during an interview with newsmen.
The suspect said he went to drop a person in Ghana and was on his way back to Nigeria when he was arrested by men of the customs command.
According to him, the person that I took to Ghana used his passport in all the posts and after stamping it, they allowed us to pass.
The suspect said that he did his NYSC programme in Kaduna State in 2016.
He said: “I have issues with NYSC and since then, I have not submitted my identification card.
“So, I used the card for identification on roads.
“All I know is that the owner of the car will come and claim his car.
“I only helped him to drop his brother in Ghana.”