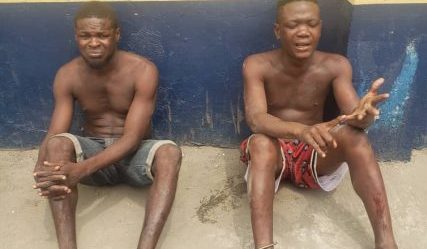 The Lagos State Police Command has restored normalcy to Herbert Macaulay Way and Ondo Street, both in Ebute Metta area of the state, where suspected cultists attacked individuals, dispossessed them of their valuables and damaged property.

The spokesman of the Command, Muyiwa Adejobi, who confirmed the incident, said two suspects have been arrested by the police with dangerous weapons.

Adejobi said the incident, on Wednesday at about 11am, created fears in the minds of innocent Lagosians.

Those arrested were Tunde Rosanye, 39, and Muyideen Ayede, 20.

Items recovered from them included one locally-made short gun, some live and expended cartridges, two cutlasses, three knives, one mobile phone and a small bag.

Adejobi said the suspects have given useful information to the police and efforts are on to apprehend other fleeing members of the gang.

The Commissioner of Police, Lagos State, Hakeem Odumosu, while assuring Lagosians that all hands will be on deck to consistently fight crimes and criminality, especially cultism and gangsterism, ordered that the suspects be moved to the State Criminal Investigation Department, Panti, Yaba for proper investigation.

Odumosu also vowed that other members of the gang will be brought to book.