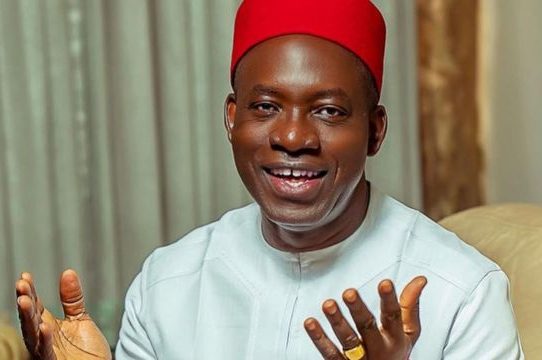 Suspected cultists wielding guns and other dangerous weapons disrupted a meeting that was scheduled to be held between the Anambra State Governor, Prof Chukwuma Soludo, and tricycle operators, on Thursday.

It was gathered that the incident happened at the Alex Ekwueme Square, Awka.

The tricycle operators had gathered to thank the governor for the bold step he took in stamping out touting and all forms of illegal revenue collections as well as to notify him of the latest development in that sector since he announced the decision to stop touting in the state.

It was gathered that the hoodlums also targeted a human rights activist, Osita Obi, who had been at the forefront of the fight to rid the state of touts.

It took the intervention of the police officers from the B Division Awka to rescue the 60-year-old activist.

According to an eyewitness, “The Keke drivers were waiting patiently at the Ekwueme Square for the arrival of the governor to thank him for the bold step he took to stamp out touting and all forms of illegal revenue collections as well as to intimate him with the goings-on in the field barely one month he took the decision to fight touting to a standstill in Anambra State.

“They had all assembled when suddenly two tricycles loaded with about 11 armed thugs invaded the venue, identified the said Comrade Osita Obi, and pounced on him, beating him mercilessly until the police operatives from B Division Awka came just in time; shooting in the air and rescued the activist from the hoodlums.

“The hoodlums were sent to disrupt the governor’s interface with the Keke drivers.”

Speaking with our correspondent in his hospital bed at the emergency unit of the Chukwumeka Odumegwu-Ojukwu University Teaching Hospital, Amaku Awka, Obi said if not for the timely intervention of the police, he would have been a dead man.

He said, “We were patiently waiting for the governor’s arrival when some armed young men descended on me and hit me with all kinds of weapons with the intention to kill me because I was supporting the governor’s decision to end all manners of illegal revenue collections, especially from Keke drivers.

“We gathered at the Ekwueme Square to thank the governor for removing touts and cultists from Keke operation and also to give him feedback on what is happening in the field. So, not long, one Collins Ozojiofor, alias Snoop, came with some boys to attack me.

“They stole my phone, my eye glasses and stole the N50,000 I had on me. They beat me mercilessly. You can see my swollen face. I have pains all over me. Their mission was to kill me. Some of the Keke drivers alerted the Police Public Relations Officer who then called the DPO of B Division and they came there and rescued me and took all of us to the police headquarters.

“There at the police headquarters, while we were waiting for the commissioner to come and talk to us, I fainted. That was how I was rushed first to the Government House clinic, because I wanted the government to be aware of what we are doing. So, the Chief Protocol Officer directed that I should go to the Commissioner for Health who also directed that I should come to the emergency unit here.”

He said the fight against illegal revenue collections was not Soludo’s fight alone. He said citizens ought to support him with feedback.

He, therefore, thanked the state government for taking care of his hospital bills, saying that he would continue to fight to ensure that revenue touts were completely eliminated from the state.

Also speaking, a tricycle driver, Udeh Chidubem, stated that they had cried to the government as well as the leadership of the state union over imposition of illegal levies on them to no avail, which he said resulted in series of protests before the Soludo government.