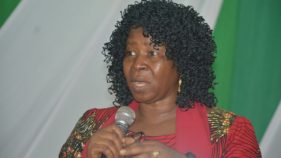 The Nigeria Civil Society Situation Room (Situation Room) has called on the National Assembly and all institutions of government to always uphold the tenets of democracy in the discharge of their duties.

Situation Room Convener, Ene Obi, at a news conference on Wednesday in Abuja, also enjoined them to act in the interest of Nigerians at all times.

Obi said that the Situation Room also called on the National Assembly to include electronic transmission of results in the Electoral Amendment Bill.

“Nigerians are watching and waiting anxiously for the inclusion of electronic transmission of election results and a downward review of the limits of election expenses in the Electoral Bill, 2021.

“Situation Room calls on the National Assembly to pass the Electoral Bill and transmit the same to the president for assent before proceeding on recess,” she said.

Obi said that the group commended the National Assembly for declining the confirmation of Ms Lauretta Onochie as the Independent National Electoral Commission (INEC) Commissioner.

She said that the decision was a respect for the rule of law and adherence to the voice of Nigerians.

“The reason cited by the Senate for declining Lauretta Onochie’s confirmation as INEC National Commissioner is to avoid a violation of the Federal Character Principle.

“Situation Room lauds the Senate’s decision to uphold the Federal Character Principle enshrined in Section 14(3) of the 1999 Nigerian Constitution and its adherence to the voice of Nigerians by rejecting Onochie’s nomination.”

Obi said that the Situation Room called on President Muhammadu Buhari to nominate a qualified and non-partisan woman to replace Onochie as soon as possible, adding that there were other qualified indigenes of Delta fit for the position.

She explained that the CSOs were not against the person of Onochie because she is a Nigerian but she could function elsewhere for Nigeria.

Mr James Ugochukwu, Co-Convener Situation Room, commended the media for the role they played in the process of Onochie’s nomination.

“We are looking at overhauling the electoral process in such a way that the nomination of people from the INEC chairman to key positions is done in a non-partisan manner.

“That is to say we remove that power completely from the executive. The process has been known from Ken Nnamani’s report even back to the Uwais’s report; so these are the things we are looking at.”