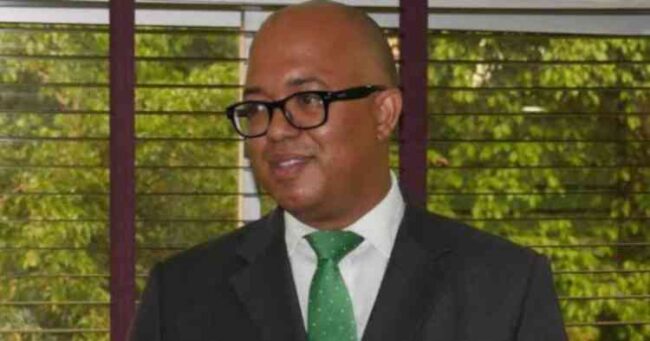 There is apprehension in the Abuja head office of the Nigeria Centre for Disease Control, no thanks to the decision of the Director-General, Dr. Chikwe Ihekweazu, to remain in office after the expiration of his tenure.
Despite the order from the Permanent Secretary of the Federal Ministry of Health, Alhaji Abdullahi Mashi, who is the overall boss of the Ministry in the absence of a Minister, that Ihekweazu should vacate office based on the content of his appointment letter dated August 1, 2016, he has bluntly refused to obey the instruction.
A Presidency source, who is in the know of what is going on in the agency, declared that the Permanent Secretary has made an official complaint against the D-G to the Secretary to the Government of the Federation, Boss Mustapha.
The Presidency source said: “There is a complete loss of confidence in the D-G and the top officials no longer hold meetings with him.”
Aside the fact that this action may affect the integrity of President Muhammadu Buhari, it may also affect the mandate of the agency to effectively respond to the challenges of public health emergencies, another source said.
The source declared that the Presidency is already shopping for a replacement “and this will be announced soon”.
The top four Directors in the agency are Dr. Joshua Obasanya, Olubunmi Ojo, Nwando Mba and Y. Y. Abdullahi.
Of these four, Obasanya is the most senior.
There are also Deputy Directors such as Dr. John Oladejo, Elsie Ilori, Dr. Priscilla Ibekwe, Dr. Chinwe Ochu and Dr. Olufemi Ayoola “and I can tell you for free that these top officials don’t see eye to eye with the D-G again”.
One of the junior officials in the ministry declared: “Our D-G has vehemently refused to vacate office, despite the instruction from the Permanent Secretary.”
He said Ihekweazu assumed office on August 1, 2016 based on a letter signed by a former SGF, Babachir David Lawal.
With Ref. No. SGF.6/XXI/356, and entitled: “APPOINTMENT OF NATIONAL COORDINATOR/CHIEF EXECUTIVE OFFICER OF THE NIGERIA CENTRE FOR DISEASE CONTROL AND PREVENTION (NCDC),” the letter reads: “I am pleased to inform you that the President of the Federal Republic of Nigeria, Muhammadu Buhari, GCFR, has approved your appointment as National Coordinator/Chief Executive Officer of the National Office for the Nigeria Centre for Disease Control and Prevention (NCDC).
“The appointment took effect from 25th July, 2016 and your emoluments and other conditions of service are as provided under Certain Political, Public and Judicial Office Holders (Salaries and Allowances etc.) (Amendment) Act, 2008.
“I am to add that your tenure terminates at the end of this Administration unless otherwise decided by Mr. President.
“Please accept my congratulations and best wishes on your appointment”.
The source declared that Ihekweazu “pressed all the buttons” to ensure a renewal of his tenure in May and April, but a fresh letter was not given to him.
The source said: “He should have left office since May 29 but he has been using delay tactics. I can tell you that the morale is down in our office. All our ogas (Directors) don’t attend meeting with Dr. Ihekweazu again.
“I remember the last meeting they had with him was about two days after the inauguration of President Muhammadu Buhari for another term on May 29.
“The D-G should have left office on May 28 but he told them that he would leave office Tuesday of the following week. Twenty-four hours to the day, he called them again and announced that he would leave office the following Thursday.
“All of a sudden, the next thing we saw was a letter from the D-G, informing all Directors, Heads of Departments and members of staff that he would go on one-week leave from June 13 to 21.”
The letter, dated June 11, 2019, reads: “Dear Colleagues, I will be proceeding on annual leave from the 13th to 21st of June, 2019.
“During this period, Dr. Joshua Obasanya will act in my capacity as Director-General.
“I am very grateful for the hard work and support from you all in the first half of this year. It has been an extremely busy period but with a lot of success and remarkable achievements.
“The prospects of what we can achieve in the next half of the year are very exciting. I look forward to more progress on this journey.
“Once again colleagues, thank you very much for your support.
“Dr. Chikwe Ihekweazu.”
The source said the paragraph: “The prospects of what we can achieve in the next half of the year are very exciting. I look forward to more progress on this journey,” is already causing ripples in the agency as it is believed that Ihekweazu does not want to vacate office despite the expiration of his tenure.
The source alleged that the D-G “is still signing cheques and awarding contracts, backdating them to May 27”.
The source added: “There is a serious lacuna in our office. The sit-tight syndrome is already affecting our operations here. There is also the allegation of nepotism against the D-G. Since the D-G resumed from the one-week leave, I have not seen our ogas (directors) in his office. Now, we hear all kinds of rumours. There is tension everywhere. One of the ogas (Directors) told me that they will not have any meeting with him. Honestly, since the Permanent Secretary advised the D-G to leave, I wonder what he is still doing in the office.”
Established in 2011, the core functions of NCDC include prevention, detection and control of diseases of public health importance.