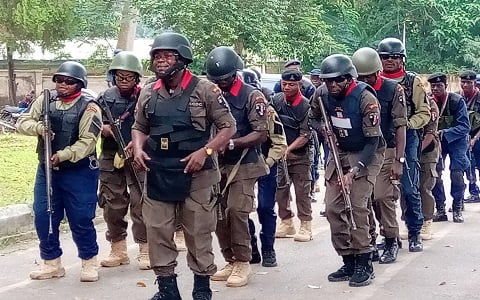 The Kaduna State Command of the Nigeria Security and Civil Defence Corps has alerted motorists of new antics adopted by criminals to break into vehicles in the state.
The Command’s Public Relations Officer, ASC Orndiir Terzungwe, in a press statement on Monday in Kaduna, said criminals now use chemicals to melt vehicles glasses to steal valuables.
He said the Command had received complaints from victims and urged vehicle owners to exercise caution while parking vehicles without anyone watching over it.
Terzungwe said: “This action has become necessary following a reported incident which a parked car was ransacked at Ungwan-Maigero by criminals after using chemicals on the glasses.”
He said the victim lost over N350,000, which was carted away by the criminals on March 20.
The victim was quoted as saying that at one time, some unknown persons called him claiming to be from the Economic and Financial Crimes Commission shortly after withdrawing money from a bank.
Terzungwe said the corps will intensify surveillance with a view to arresting the perpetrators, adding: “The command is calling on the public to be wary of these syndicates and assist with useful information that will help in arresting the members.”