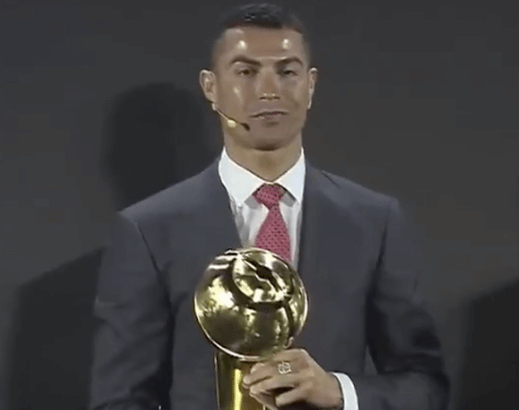 Cristiano Ronaldo and Pep Guardiola picked up honours for the century in the Globe Soccer Awards.

The event at the Burj Khalifa, Dubai, saw trophies get handed out to recognise the best people in football for the year and the current entry from 2001 to 2020.

And the Juventus forward, who has won 15 major titles with Manchester United, Real Madrid and the Italian club, picked up the Player of the Century award.

He is already very familiar with the ceremony, having won six of the 10 Player of the Year honours since 2011.

But that honour was taken this year by Bayern Munich forward Robert Lewandowski, having scored 55 goals in 47 games on his way to a first Champions League honour.

That victory also saw the Bundesliga side win the Club of the Year and their manager Hansi Flick pick up Coach of the Year.

The Coach of the Century award, though, went to Manchester City manager Guardiola, having won honours with Barcelona, Bayern and the Citizens.

But fans on Twitter were less than impressed as United legend Sir Alex Ferguson and Tottenham boss Jose Mourinho missed out.

“How has this happened,” one viewer on Twitter said.

While a third joked: “Sir Fergie and Mourinho were robbed.”

Club of the Century went to Real Madrid, who have spent millions on their way to seven La Liga honours, two Copa del Reys and five Champions League between 2001 and 2020.

And there was even an honour for Agent of the Century, which went to Ronaldo’s man Jorge Mendes.

He is another one familiar with the event, though, having won nine of the 10 Agent of the Year awards at the Globe Soccer Awards.

THE WINNERS
Club of the Year – Bayern Munich

Club of the Century – Real Madrid

Player of the Year – Lewandowski

Player of the Century – Ronaldo

Coach of the Year – Hansi Flick

Coach of the Century – Guardiola

Agent of the Century – Jorge Mendes