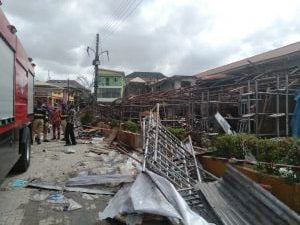 The Lagos State Commissioner of Police, Hakeem Odumosu, has dismissed rumours making rounds that the Kairo market in Oshodi, which was gutted by fire on Thursday, was caused by a bomb explosion.

While on-the-spot assessment of the damages at the market on Friday, Odumosu said people should desist from making inflammatory statements which could set the country on fire.

He said the Explosive Ordnance Department of the State Police Command has not discovered any bomb at the scene of the incident, and therefore the fire could not have been caused by a bomb explosion.

He said: “We have seen what happened and we give God the glory no lives were lost.

“No matter the values of things that were lost, it cannot be compared with lives.

“We also thank God that the portion that got burnt is not more than the area not burnt.

“Since it started, I have deployed my men and they have been on ground.

“My coming is to have a physical assessment of what happened.

“We are to ensure there is no breakdown of law and order here.

“The rumour going round that it was a bomb should be dismissed.

“The tension is already high in the country and we should not make inflammatory statements.

“That’s why I am here with my technical team, the bomb experts in the police and they have gone round and no proof the fire was caused by a bomb.

“It has been ruled out that there was a bomb explosion here.

“No bomb was found here.

“So people should allow the fire service and the police to conduct their investigation and when the report from their laboratory comes out, we will make a statement.”

Odumosu appealed to those who lost their goods to the fire, saying efforts are ongoing to involve the state government to come to their aid.

He said: “We only appeal to the people to control their annoyance and emotion.

“Whoever is aggrieved, we are appealing to them not to take it too far because we are not going to allow breakdown of law and order.

“We are deploying our men here both in mufti and uniform.

“We are up to the task and the chairman will seek palliatives from the governor for those affected.

“We keep appealing to the people to be patient.

“The chairman will take it up politically while I take it up security wise.”

While appealing to the people of Oshodi to remain calm, the Chairman, Oshodi/Isolo Local Government, Hon. Bolaji Ariyo, urged them to allow the police to conclude their investigations.

Ariyo said: “By the time I heard about the news, I was in a closed door with the governor.

|We need to give glory to almighty Allah for saving what is on ground.

“Looking at the live video when the fire was raging, if anyone had told me there would be a block still standing, I would not have believed.

“We want to thank the fire service for coming out promptly and they were able to rescue this place.

“We know fire can always occur and we have the Commissioner of Police.

“I have been on the phone with him since yesterday and he’s here.

“We believe investigation is going to be carried out to identify the cause of the fire.

“Our people are really in pains.

“From what I heard, many in the market collected money from micro finance banks to do business because Ramadan is coming to an end.

“When festival is coming like this, a lot of business goes on.

“A lot of them are engaged with banks and it’s only God that can comfort them.

“I really feel sorry for them but I pray God will come to their needs.”

On rumours the fire was caused by a bomb, the Chairman also urged the people to ignore such.

Ariyo added: “There are so many rumours around but I will tell them to ignore them and let the police do their investigation and come to the final answer.

“They should let the peace reign and there is no need to engage in any violence because the government will not support any violence.

“The CP is ready to address any issue.

“I am confident he will take care of it and get back to us on what actually happened.

“We should all be calm.

“After this, we will sit down with the governor and we know how we can help the people affected because they are seriously in pains.

“So many goods worth millions of naira were lost.

“My people in Oshodi should calm down. Inspite of the magnitude of the fire, nothing was stolen.”