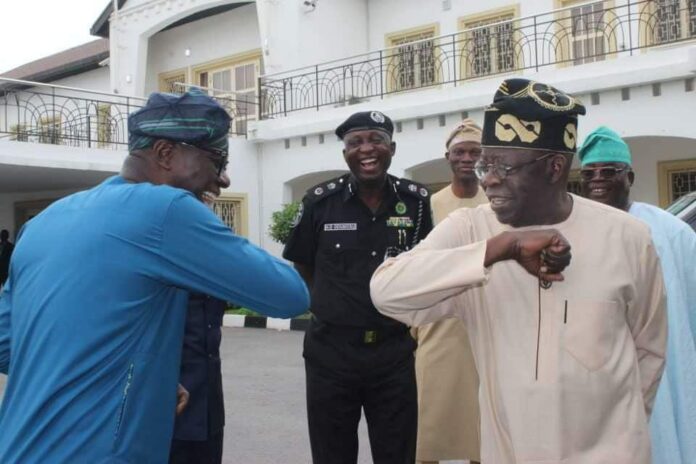 The National Leader of the All Progressives Congress, Asiwaju Bola Ahmed Tinubu, has thrown his weight behind the preventive measures being taken by the Lagos State Governor, Babajide Sanwo-Olu, to stop the spread of novel Coronavirus Disease (COVID-19) in the State.
Tinubu said Sanwo-Olu had shown leadership in the implementation of the response strategy to manage confirmed cases and tracing of contacts even beyond the borders of the State.
The former Lagos State Governor described coronavirus as “mysterious enemy”, saying leaders across the globe were in for a “challenging period” as they take actions on daily basis to combat the ravaging epidemic.
Tinubu spoke on Tuesday after a private meeting with Governor Sanwo-Olu at the State House in Marina.
The APC National Leader said: “First of all, I congratulate the Government of Lagos State for what has been done so far and the regular information that the Government is sharing with the public.
“This is the essence of leadership.
“Nigerians need a lot of education in this challenging period.
“I congratulate the Governor (Sanwo-Olu) for the fact that he asked the workers to stay at home to discontinue the chain of transmission.
“We must respect this order and obey the Government.
“We endorse the position of the Governor.
“Let people stay at home in this period and pray in their houses.”
Tinubu said he would be in support of further stringent measures, suggesting a total lockdown in the State to stop the epidemic.
If the Prime Minister of the United Kingdom could lock down the city of London, the APC leader said, there would be nothing strange if the Lagos State Government took similar decision.
He said: “I can’t pre-empt what the Governor would be doing next.
“But whatever decision he takes, he has our support.
“We have reviewed the previous measures with him and he has also reviewed with his team.
“We have confidence in the team; whatever they say, we will comply.”
Tinubu said the people must embrace the new culture of social distancing to break the cycle of transmission, noting that actions being introduced against COVID-19 would teach people the lesson of being hygienic at all times.
He particularly advised students and market women to heed the Government’s directive, stressing that their activities must help the nation to win the battle against the disease.
He said: “The activities in the market must reflect the new culture; we all must obey the Government.
“Having to restrict hugging and family excitement doesn’t mean we don’t love one another.
“We do, but we have to prevent the spread of a mysterious disease that is our common enemy.”
Tinubu hailed all religious leaders who obeyed the directive of the Government on public gatherings and also disseminated information about COVID-19 to their followers.
The politician urged members of the public to heed the directives issued by the Government and tasked them to maintain personal hygiene in order to protect their fellow patriots.

Today, the former Governor of @followlasg, @AsiwajuTinubu lend his voice to the campaign against #COVID19. Tinubu who addressed press men after a meeting with @jidesanwoolu at the State House Marina commended the efforts of the @followlasg in educating citizens about #COVID19 pic.twitter.com/qoOHWgfQcX