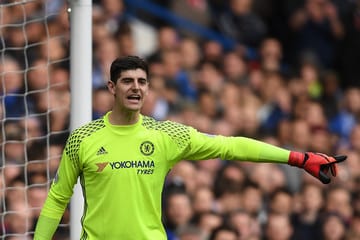 Chelsea goalkeeper Thibaut Courtois has been confirmed as the winner of the Premier League Golden Glove award.
The Belgium international has kept 16 clean sheets in the top-flight as the Blues romped to their second title in three seasons.
Former Atletico Madrid shot-stopper Courtois beat off stiff competition from Tottenham’s Hugo Lloris, who finished with 15 clean sheets.
Manchester United’s David de Gea, Southampton’s Fraser Forster and Arsenal’s Petr Cech round out the top five.
Despite Antonio Conte’s side going on a run of 11 matches without a shutout during the second half of the campaign, Courtois’s superb form in the earlier part of the season has seen him secure the award.
He has also benefited from a setttled defence in front of him, with Cesar Azpilicueta, David Luiz and Gary Cahill all excelling under Conte’s tutelage.