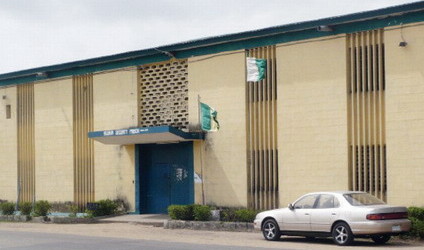 An Ikeja Chief Magistrates’ Court in Lagos State on Tuesday remanded two accused in the Kirikiri Prison for allegedly robbing a woman of her handbag containing some personal effects at a gun point.
The Chief Magistrate, O.A. Layinka, refused the accused persons’ plea for bail and ordered that they should be remanded till November 8.
Layinka ordered the prosecutor to duplicate the case file and forward same to the Director of Public Prosecutions for legal advice.
Earlier, the prosecutor, Sergeant Donjor Perezi, had told the court that the accused – Michael Oguava, 26, a cobbler, and Toheeb Anifowose, 29, a tricycle rider – were residents of Amukoko Alaba area, a suburb of Lagos.
Perezi said they were facing trial on a two-count charge of alleged armed robbery and stealing.
The prosecutor said the accused committed the offences on April 10 at Coker Aguda area of Lagos.
Perezi alleged that the accused were spotted by a security guard while they robbed their victim, Angela Pius, at gun point and snatched her handbag containing a cell phone and N110,000 cash.
He added: “The accused escaped with the bag.
“And sometime in June, the accused were going for another operation when the same security guard sighted them.
“He called the police who apprehended the accused and detained them at the police station.
“At the police station, they confessed to have snatched the woman’s hand bag.”
The prosecutor said the offences contravened Sections 285 and 295(2) of the Criminal Law of Lagos State, 2011.