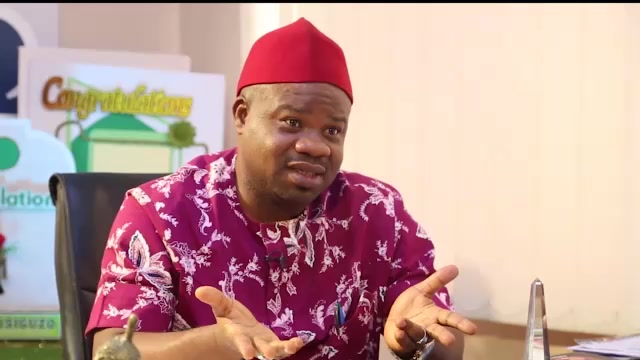 The President, Nigeria Union of Journalists, Chris Isiguzo, has been dragged before a Federal High Court sitting in Abeokuta over the decision to dissolve the leadership of the union in Ogun State.

The suit, FHC/AB/CS/50/2019, was instituted by the Ogun State NUJ Chairman, Soji Amosu, and four others.

It seeks an order of injunction restraining the president and other respondents from conducting fresh election into the offices being manned by the applicants.

It also sought an order nullifying the May 7 meeting of Central Working Committee of the union as it affects the offices and election of the applicants held on March 29, 2019.

Amosu had emerged as state chairman on March 29 after his inauguration same day, alongside other executive members in a peaceful election supervised by national officers of the union.

Following the purported decision by the NUJ national leadership to annul the election and constitute a caretaker committee to run the union, Amosu and other elected officers approached the court to seek redress.

Kayode Taiwo, Segun Lawole, Adewole Dosunmu, Ayo Obadimu and Dele Ayodo, who were purportedly listed as members of the caretaker committee of the union, were joined in the suit as 11th to 15th respondents.

In an originating summons and motion on notice brought pursuant to Order 28 Rule 1 of the Federal High Court (Civil Procedure) 2009, supported by a 32-paragraph affidavit, the applicants sought the interpretation of Article 5 Paragraph 10 and Article 6 Paragraph 7 (f) of the NUJ constitution.

The applicants also sought a declaration that in view of the extant provisions of the union constitution, the sixth, seventh, eighth and tenth respondents are not eligible to contest for any elective office of the union.

They sought a declaration that all resolutions taken concerning the March 29 election at the CWC meeting “37 clear days after the election” of the applicants was null and void, unconstitutional and illegal.

The applicants also sought an order setting aside the CWC meeting in so far as it affects the offices and election of the applicants.

On Monday, the presiding judge, Justice Muhammad Shittu Abubakar, ordered that all the respondents be served the court originating summons and motion on notice before May 20, the adjourned date.

Counsel to the applicants, Deji Enisenyin, had told the court that few of the respondents were served before his appearance in court.

The sixth, eleventh and twelfth respondents were represented by their counsel, S.O. Tijani.