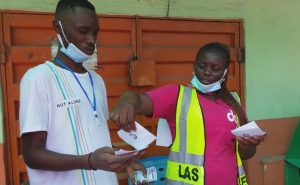 Voting has ended in most polling units as vote counting and collation of results got underway after Saturday’s elections into the 20 Local Governments and 37 Local Council Development Area (LCDA) in Lagos State.

The News Agency of Nigeria’s correspondents, who monitored the exercise, reports that collations have started at the ward levels where winners of the councillorship election would be returned.

The counting of votes at the polling units were carried out in the presence of agents of political party and security agents.

NAN reports that the Lagos State Independent Electoral Commission (LASIEC) had earlier announced that results of Saturday’s local government election in the state will be declared at the ward and local government levels.

Saturday’s election into the 20 LGs and 37 LCDAs of the state, which commenced at 8 a.m. and ended at 3 p.m., was characterised by voter apathy and malfunctioning of Smart Card Readers.