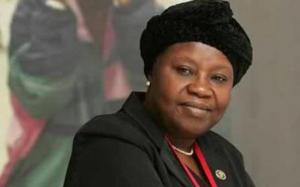 President Goodluck Jonathan has approved the immediate retirement of Justice Charles Archibong, a judge of the Federal High Court.
The Attorney General of the Federation and Minister of Justice, Mohammed Bello Adoke, told State House correspondents on Monday that the approval was sequel to the recommendation by the National Judicial Council.
Adoke said: “This is to inform you that President Goodluck Jonathan is in receipt of a recommendation from the National Judicial Council recommending the compulsory retirement of Justice Charles Archibong and Mr. President has approved that it should take immediate effect.
“It is Mr. President’s belief that once we are able to cleanse the judiciary of corruption, then our fight against corruption in its entirety will take a firm root and will be on its way to success.”
It will be recalled that the NJC had at its emergency meeting held on February 20, 2013 recommended the compulsory retirement of Justice Archibong of the Federal High Court, Lagos and Justice T. D. Naron of High Court of Justice, Plateau State, pursuant to the ‘Findings’ by the Council on complaints levelled against them.
Justice Archibong was recommended for compulsory retirement to sequel to the following complaints levelled against him:-
• That the Judge dismissed the grievous charges against an accused without taking his plea;
• That he refused to release the Certified True Copy of his Ruling to the lawyers;
• That the Judge issued a bench warrant on some officials of Peoples Democratic Party for contempt even when the counsel who was directed by the Court to serve them filed an affidavit that he had not been able to serve the contempt application;
• That he made unfounded and caustic remarks on professional competence of some Senior Advocates of Nigeria;
• That there were glaring procedural irregularities which showed that Hon. Justice Archibong did not have a full grasp of the Law and procedure of the Court; and
• That he granted the leave sought for in the originating summons that had no written address of the parties and without hearing both parties in the originating summons after he had earlier on overruled the preliminary objection.