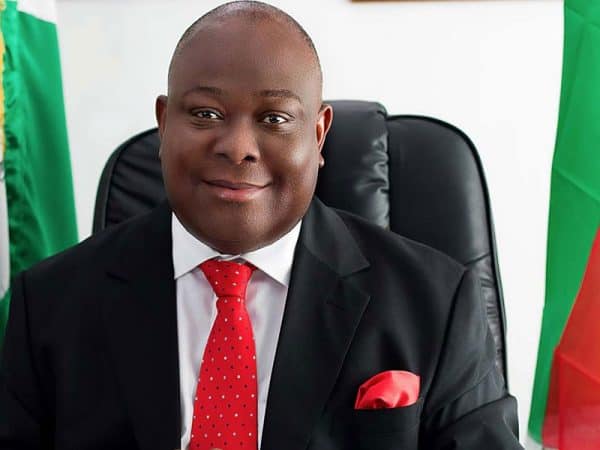 Senator Osita Izunaso, the third defendant in the ongoing certificate of return suit filed by Governor Rochas Okorocha of Imo, narrowly escaped being sent to prison on Wednesday for Contempt of court,.
Justice Okon Abang of the Federal High Court Abuja said that Izunaso ought to have been remanded in prison for putting up an attitude before the court which could best be described as “rascality of the highest order”.
At the resumed hearing of the matter, the judge announced that he received an affidavit of facts filed by Izunaso that he had an application at the Court of Appeal for stay of proceedings in the matter.
While all counsel to the defendants prayed the court to honour the said application for stay of proceedings, Okorocha’s counsel, Kehinde Ogunwumiju, SAN, urged the court to dismiss it because it was incompetent.
Having listened to submissions from all counsel in the matter, the judge then asked the court registrar to ask Izunaso to stand in front of the court in order to listen to his ruling properly.
The judge in his ruling held that putting the name of a presiding judge as one of the parties to be served a court process filed at the Court of Appeal was scandalous and embarrassing and showed that Izunaso had no respect for the court.
He said: “The motion filed at the Court of Appeal where my name is recorded is before me, tagged as exhibit c, attached to the third defendant’s affidavit of facts.
“The third defendant is also before me so I have jurisdiction over him summarily, if that was not sufficient, he deposed to an affidavit that the motion was duly served on me.
“This is only to ridicule the court and lower the esteem of the judge in the eye of the public as if the judge is a party in the matter.
“This shows the level of disregard Izunaso has for the court which is established by the constitution.”
According to the judge, the conduct of the senator that is before me is contemptuous; it is contempt to the face of the court not outside the court.
Abang said: “I have jurisdiction to deal with him summarily because he is the contemnor and he is before the court.
“The senator ought to have been remanded in prison today for contempt of court, he is before me and the offensive affidavit is also before me.”
Justice Abang held that in the case of contempt before the court, the judge was the complainant, the prosecutor and remained the judge.
He, however, held that the plea of the counsel to Okorocha had saved Izunaso and so he should “go home and sin no more”.
He said: “Having regards to the passionate plea from the learned senior counsel, (Ogunwumiju),I will let the distinguished senator go home today, not because the court is weak or cowardly.
“We have been trained to use our summary powers sparingly, I will leave the senator to his conscience, he is accordingly discharged even though I find his conduct before the court contemptuous.”
With regards to the issue of the motion filed by Izunaso for stay of proceedings, the judge said that the court records showed that he only became aware of the motion on Tuesday.
He, however, said that even though he agreed with Ogumwumiju’s submission with respect to not staying proceedings, it was safer and neater to adjourn proceedings in the matter.
He added: “However, notwithstanding the argument of the SAN, it is safer to,adjourn proceedings in this matter for mention, to abide the decision of the Court of Appeal with respect to the pending application for stay of proceedings.
“The Court of Appeal did not order stay of proceedings so I can’t stay proceedings, I will only adjourn for mention.”
The judge also said that he was aware that his staff made photocopies of his handwritten proceedings without his knowledge and permission.
He said that the only authentic certified true copy of the proceedings was the one that contained his signature.
He adjourned the matter until May 30 for mention and or to abide the outcome of the Court of Appeal with respect to Izunaso’s motion for stay of proceedings.
Okorocha filed a suit asking the court for an order compelling the Independent National Electoral Commission to issue him with a Certificate of Return as the Senator- elect for Imo West Senatorial District.
Izunaso applied to be joined as a party in the suit after which he petitioned the Chief Judge of the Federal High Court, Justice Adamu Abdu-Kafarati saying he felt shut out of the matter and was being denied fair hearing.
The court however, ignored the petition and proceeded with the matter on Tuesday but had to adjourn on Wednesday to await the outcome of the application for stay of proceedings at the Court of Appeal.