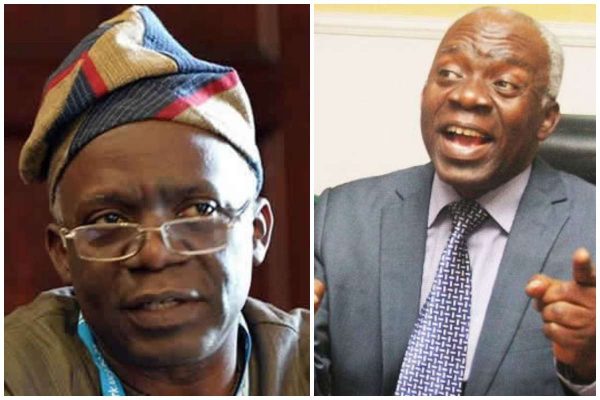 A legal luminary,  Femi Falana (SAN), has urged the National Assembly to ensure the Social Security Bill worked to tackle some of the security challenges facing the nation.

Falana, who spoke on behalf of a group, Alliance on Surviving COVID-19 and Beyond (ASCAB), made the appeal in a memoranda to the National Assembly during the South-West Zonal Public Hearing on the 1999 Constitutional Review in Lagos on Thursday.

He said people without jobs must be given something at the end of the month, otherwise they were going to make it impossible for the rich and others to enjoy their freedom.

According to him, Chapter 2 of the Constitution must be justiceable and enforceable for there to be political stability in Nigeria.

“The areas that guarantee right to education for every Nigerian child, right to health, right to living minimum wage, right to good adequate housing and right to unemployment benefits when you’re not given a job or when you are unemployed, those provisions of the constitution must be strictly adhered to and enforced.

“I submit that Child’s Rights Act, enacted by the National Assembly in 2003 be made applicable throughout Nigeria.

“Only 25 states in Nigeria have adopted the law but even then, they were not being implemented.

“Some of the states that have refused to adopt the child’s right law include_ Zamfara, Borno, Kastina and all those states were banditry and terrorism have virtually been institutionalised,” he said

Falana also urged the national assembly to take care of people living with disability and ensure that such was  applicable throughout Nigeria.

He added that the Compulsory and Free Basic Education Act of 2004 should be made applicable throughout the country,

“On the principle of Reform Act, we must have equal treatment of workers, while urging the ninth assembly to learn from other African countries like South Africa, Ethiopia and Rwanda.

He noted that women constituted 50 per cent of the population, therefore, they should have equal rights to governance.

He advocated sanctions for impunity, adding that the country ruled, not by rule of law but by rule of rulers, noting that people committed all manners of offences but were not sanctioned.

“We want a country run by democrats, we want our democracy to be monitored and manned by democrats.

“I, therefore, suggest that restructuring must be horizontal and vertical, if those powers are transfered from the centre, safe to say those powers must be democratised and not cornered by any group or people.

“We are also suggesting that under the current constitution there is no Federal Government Police,” he said

He urged that if there was going to be state police, their funding and salaries should be from source.

He said: For state police, their funding and salaries must be from the centre.

“I urge the National Assembly to make the constitution work.”

Also speaking,  Bode Olanipekun, a legal practitioner, frowned at  limitation or reduction of the appellate jurisdiction of the Supreme Court

Olanipekun said the problem was not in the fact that the appellate jurisdiction of the Supreme Court was wide, but what should be addressed critically in the constitution was the appointment procedure to the bench.

“The problem really is that of capacity and character and not over burdening of the court by jurisdiction.

“Nigeria as at today is not ripe for a reduction, not the appellate jurisdiction of the Supreme Court. We should wait till a time when judicial outcomes are respected.

“If decisions of high courts are respected and enjoy a lot of quality, litigants will even be discouraged from going on an appeal because they will take judgment and look at the fact and know that such judgment can hardly be faulted in law and logics. Naturally, appeal will reduce,” he said.

According to him, the rights of citizens to appeal should not be curtailed in critical issues as this may be dangerous.