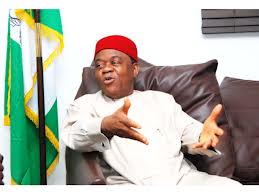 As criticisms continue to trail Nigeria’s early outing at the FIFA Confederation Cup in Brazil, former Abia state governor Dr.Orji Uzor Kalu on Thursday put up a strong defence for the Super Eagles.
Dr Kalu said “We may all be wrong after all”, Kalu said.”Anyone who expected the team to have it easy was dreaming. The Eagles’ tight schedule and flight plans were the problem.
“They embarked on a trip around the globe, from North America to Germany, Nairobi to Namibia, then across the Atlantic to South America. It was like the legendary ‘Ajala’ journey.”
The ex-governor noted that the team did not perform when much was expected of them.
He spoke further, “It is our lot. No one gave the Dream Team a chance on the way to Atlanta in 1996, especially after they lost 0-3 to Togo in their final friendly in Lagos.
“Many Nigerians did not believe in Samson Siasia’s Flying Eagles in 2005. Nor did they believe in the 2013 Eagles team to South Africa. Yet, they all did well”.

According to Dr Kalu’s media aide, Emeka Obasi, the former Abia governor wondered how the Eagles were expected to fly high with many stars out or down with injury.
“There was no Emmanuel Emenike. We missed Victor Moses, Ogenyi Onazi, Nnamdi Oduamadi and even Keneth Omeruo.
“Many have forgotten that Spain are world and European champions as well as number One. Uruguay were Third best at the South Africa 2010 World Cup.
Against the South Americans, Nigeria played Champagne soccer. The 2014 World Cup will be a different ball game.” Kalu summed up.