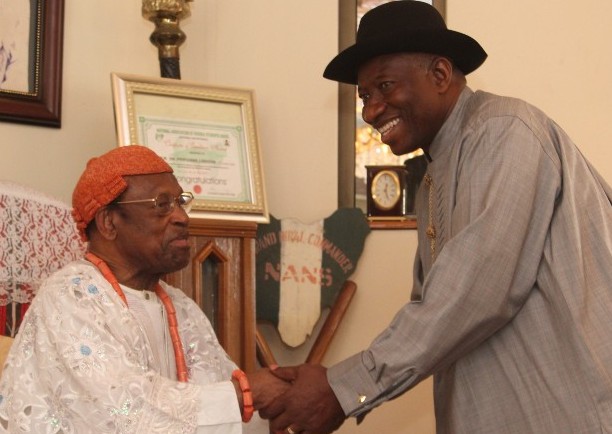 The Asagba of Asaba, Obi (Prof.) Chike Edozien, has demanded that the massacre of the people of Asaba during the 1967 civil war should be compensated by President Goodluck Jonathan.
The monarch made the demand on Friday when the President visited his palace to consult him on his re-election bid.
Nigerian soldiers massively executed Asaba indigenes in the wake of civil war, leaving their kinsmen in sorrow, tears and blood till date.
Obi Edozien, who lauded President Jonathan who was on a consultative visit to various groups in the state, including the Arewa Consultative Forum, for the courageous role he played by constituting the concluded National Conference committee, appealed to him to dualise the link road from Asaba to Kogi to Benue and Abuja.
He lauded the President for taking the bold steps against the Boko Haram terrorists, even as he enjoined him to liaise with the National Assembly on the implementation of the National Conference report.
He said: “So many of our people were killed during the civil war and till today nothing has been done to appease the people. We appeal and look forward to when the Federal Government will compensate us for their gruesome murder.”
While the monarch assured Jonathan of his support for his re-election bid, he urged him to upgrade the standard of the budding Asaba airport to global standard.
Earlier, President Jonathan, who sought the blessing of the traditional ruler on his re-election campaigns, promised to improve on the 20,000 kilometre road network he constructed, promising to complete 10,000 more kilometres when re-elected.
The President, who acknowledged that his administration has not spread the dividends of democracy evenly, listed his achievement in the past four years to include, more power generation, upliftment in educational standard, improved agriculture and job creation.
While he thanked the monarch, whom he described as a “First Class Traditional Ruler” for the support he has enjoyed from his domain, he vowed to unleash another four years of prosperity on Delta State and Nigeria at large.
He said: “I want to re-assure you that as a party, we will do our best to bring peace and security to the country and fast-track economic development in all parts of the country. We have tarred over 25,000km of the 36,000km federal roads and we promise to complete the remaining ones and open up more arterial roads when re-elected.”
While disclosing that over 90 per cent of narrow gauge rails have been completed throughout the country, President Jonathan re-iterated: “The implementation of the Nigerian content law in the oil industry has improved the participation of Nigerians in the industry and the implementation of our cabotage law with Nigerians now owning ships and more Nigerians have been employed in the shipping industry.
“We also saw the need to establish Maritime University for high-powered man-power development in the Maritime Sector; we are moving the country forward. We are not resting on our oars in concluding the privatisation of the power sector as we believe that to improve the small and medium enterprise sector, power is very important. We believe that by next year, we would have concluded 100 per cent privatization of the power sector, it will take a life of its own with epileptic power supply becoming a thing of the past.”