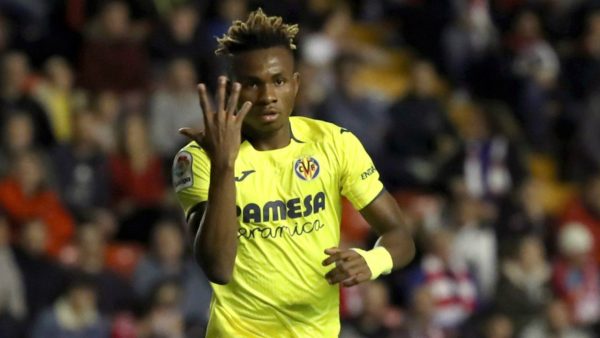 Red-hot Nigerian midfielder, Samuel Chukwueze, grabbed the lone goal in Villarreal away win over Girona in a Laliga tie on Sunday.
Chukwueze hit the back of the net after six minutes from kick off.
Vicente Iborra won the ball at the edge of Villarreal box, then Pablo Fornals played a great ball forward for the Nigerian to run onto as he made no mistake with his finish.
Ten minutes later, Cristhian Stuani scored for Girona but the goal was disallowed after it was ruled offside by VAR.
With their goal not given, the red-and-whites were spurred on even more and had their best minutes of the game in the lead up to the half-an-hour mark. Eusebio’s side attacked in earnest, looking to find Stuani with crosses into the box, but the Submarine held strong at the back.
The victory was a valuable one as it move the Yellow Submarines out of the relegation zone.
With 33 points from 32 game, Villarreal have moved to 15th spot on the log.
Villarreal will on Thursday travel to turn the table against Valencia in the second leg of the Europa League semi final.
They lost the first leg at home by 1-3.