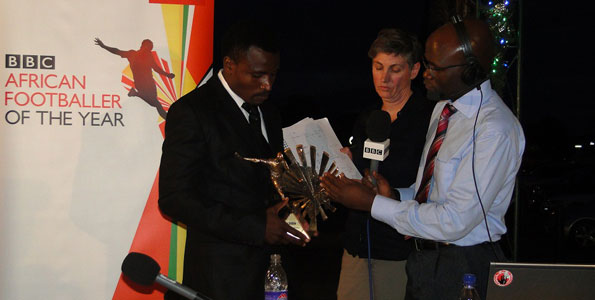 Christopher Katongo, who led Zambia to Nation’s Cup success earlier this year, has been voted BBC African Footballer of the Year.
Katongo, who plays for Chinese side, Henan Construction, won just over 40 per cent of the vote, holding off Didier Drogba (Ivory Coast and Shanghai Shenhua), Yaya Toure (Ivory Coast and Manchester City), Younes Belhanda (Morocco and Montpelier) and Demba Ba (Senegal and Newcastle).
The winner was announced live on the BBC World Service sports programme, Sport Today, by the BBC Africa presenter, Farayi Mungazi.
The trophy was presented to Katongo by President of the Zambian Football Association and former Zambian captain. Kalusha Bwalya, alongside the country’s Minister of Sport, Chishimba Kambwili.
Katongo said: “This is a fantastic moment for me and I also want to thank the people who voted for me.
“I think they have seen what I have done for the past two years.
“You know, it was a difficult competition to compete with high class players and then I came up as a winner as the BBC African Footballer of the Year.
“This is fantastic and this is the thing that I will never forget in my football, my entire career.”
David Stead, Sports Editor for Global News languages, said: “Christopher Katongo has had a brilliant year, leading Chipolopolo to a fantastic Cup of Nations win and helping spread interest in African football to China.
“The BBC African Footballer of the Year award is becoming more and more popular with%