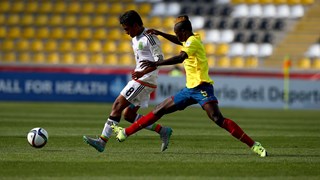 Mexico set up a mouthwatering FIFA U-17 World Cup semi-final showdown against Nigeria after eliminating Ecuador with a 2-0 win in Coquimbo, Chile.
Claudio Zamudio’s first half strike and Bryan Salazar’s penalty after the break saw off the South Americans, who fail to go one better than their only previous quarter-final appearance at this level in 1995.
The Mexicans were swift out of the blocks, controlling the ball well and attacking Ecuador dangerously in the opening moments.
Most notably Eduardo Aguirre came within inches of opening the scoring within the first minute after a cross-shot flashed wide.
Ecuador began to grow in stature, though with the electric Jhon Pereira breaking free of the Mexican defence before hitting a toe-punt shot which Abraham Romero got down to turn round the post.
It was the two-time U-17 World Cup champions who took the lead though, with Zamudio slotting home from inside the penalty area after Salazar nodded down a deep free-kick.
El Tri doubled their advantage just after the interval when No 20 fouled No 20 in the Ecuadorian penalty area.
Jean Pena brought down Mexican substitute, Jose Gurrola, and Salazar stepped up to slot past Jose Cevallos in the Ecuador goal.
The remainder of the game saw Mexico retain the ball for long spells, rarely troubled by the Ecuador attack.
Mario Arteaga’s side head for their final four clash against the four-time champions – a truly remarkable game in prospect.