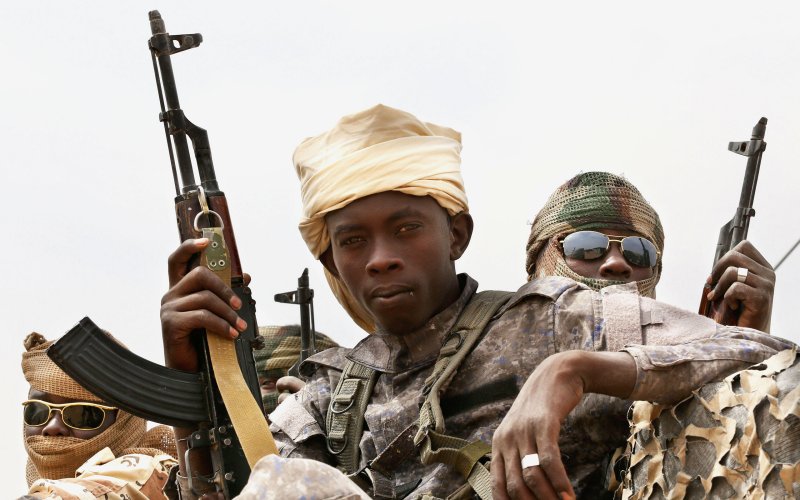 At 14 years old, Aliko should have been in a school classroom—instead, he was handed a gun. Recruited by the Civilian Joint Task Force, a pro-government self-defence militia operating in Nigeria’s northeastern city of Maiduguri, he had a simple choice: Fight Boko Haram or be killed by them.
Forced to protect his community from terrorists, Aliko is on the verge of having his youth snatched away. Before the insurgency in northeastern Nigeria, he was a schoolboy. Today he is a no-nonsense kid responsible for the arrest of dozens of insurgents. During an interview with Aliko in October, he admitted he had been involved in the arrest of several suspected Boko Haram fighters. One night, he said, he tied two people together and held them for hours before handing them over to the military the next morning.
Though Aliko and his colleagues in the CJTF may have received deserved accolades from the Nigerian government for their brave efforts in the fight against terror in Maiduguri, many Nigerians believe that for children involved in this effort, a generation is gradually being lost.
Top-level CJTF members admit that children make up nearly a quarter of the more than 10,000-strong self-defense forces fighting Boko Haram. The CJTF justifies its use of child soldiers as a necessity following increasing attacks by Boko Haram. ‘‘The insurgents are many in number, and we need as many people as we can to fight them,” says Bukkar, a senior member of the self-defence militia. ‘‘These kids have lots of energy and are very important in this fight.”
“We’ve lost our kids to the war,” says Shettima Kunduli, a local leader in Maiduguri. “Our young ones are no longer children, they are commanders who despite their brave efforts have lost their childhood, their education, and maybe their future.”
Since the insurgency began in 2009, hundreds of children have been victims of forcible conscription. A recent report (PDF) by a research and advocacy group, Watchlist on Children and Armed Conflict, says both Boko Haram and the CJTF both forcibly recruit children into their folds. According to a recent estimate, children now make up about 40 percent of the Boko Haram’s 60,000 troops. For Boko Haram, who kill with impunity, the use of child warriors needs no justification.
The war itself has also killed and injured hundreds of kids and has left many of them homeless as well. As parents are lost in the fighting, more and more children are without families and homes. Without anyone to turn to for protection and assistance, children roam around to find things to do in order to survive.
With no other means to secure a living, many orphans have joined the recruitment of armed vigilantes. The militia life has become more attractive to the children, who see a possible future of survival with their fellow soldiers, as well as the possibility to keep their communities safe.
Across northeastern Nigeria, aid workers have warned that child conscription may be on the rise. Yusuf Mohammed, a Maiduguri resident and a social worker, admits: “Those who recruit child soldiers feel more comfortable working with them than with adults. They come cheap, are extremely loyal, and can be easily controlled. Unlike adults, it is easy to brainwash children and intimidate them.”
Children also face more difficulties getting access to basic services such as healthcare, food, and shelter. At the height of the conflict in the region, a high number of deaths of children were caused by bacterial infection. Children suffer from lack of clean water and can quickly be infected with bacteria, creating a constant threat to their lives. In Borno State, an outbreak of cholera was declared in September. In under a month, there have been 4,500 cases and 70 deaths from the disease in the capital Maiduguri, where the number of cases continues to rise.
Because of the insurgency, many health facilities have been forced to close down, leaving children unable to get necessary treatment. Where there are health facilities available, children are often not considered a priority. They have become the most vulnerable victims of the five-year unrest.
For a poor kid like Aliko, who once enjoyed playing around his compound and studying after school with his peers, returning to that life—if and when the war ends—won’t be easy. While he is an obedient boy, eager to please, to the people of Maiduguri, he is now a soldier and will become a danger to other kids. Most of his former colleagues at the junior secondary school where he dropped out no longer see him as a friend to associate with, and his neighbours are scared of letting him get too close to kids in the compound.
Philip Obaji Jr. is the founder of 1 GAME, an advocacy and campaigning organization that fights for the right to education for disadvantaged children in Nigeria, especially in northeastern Nigeria, where Boko Haram forbids western education.

Naval base in Kano: An absurdity?, by Ibrahim Modibbo