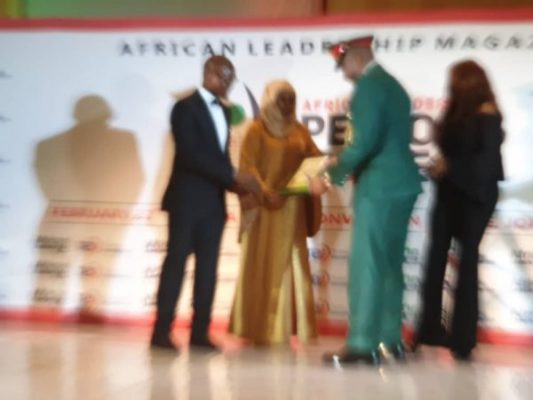 The Chief of Army, Nigerian Army, Lieutenant General Tukur Yusufu Buratai, on Friday added another feather to his well decorated cap as he was presented with African Leadership Award at the 7th Edition of the African Leadership Magazine Persons of the Year Award at the Sandton Convention Centre, Johannesburg, South Africa.
According to the Selection Committee of the African Leadership Magazine Annual Award, Buratai was honoured with the prestigious and highly coveted award in recognition of his outstanding contributions to Africa’s security, economic growth and development.
The committee further noted that the commitment and exemplary leadership exhibited by Buratai as Chief of Army Staff of the Nigerian Army stood him out among African leaders that contributed to security on the continent.
Buratai was honoured alongside other African business and political leaders from various countries of the continent.
The Chief of Army Staff was represented by the Chief of Civil-military Affairs (Army), Major General US Mohammed, who made presentation on the activities of the Nigerian Army during the event.
During the presentation, Mohammed reiterated the Nigerian Army’s commitment in defending the territorial integrity of the country and enhancing excellent civil-military relationship in Nigeria.