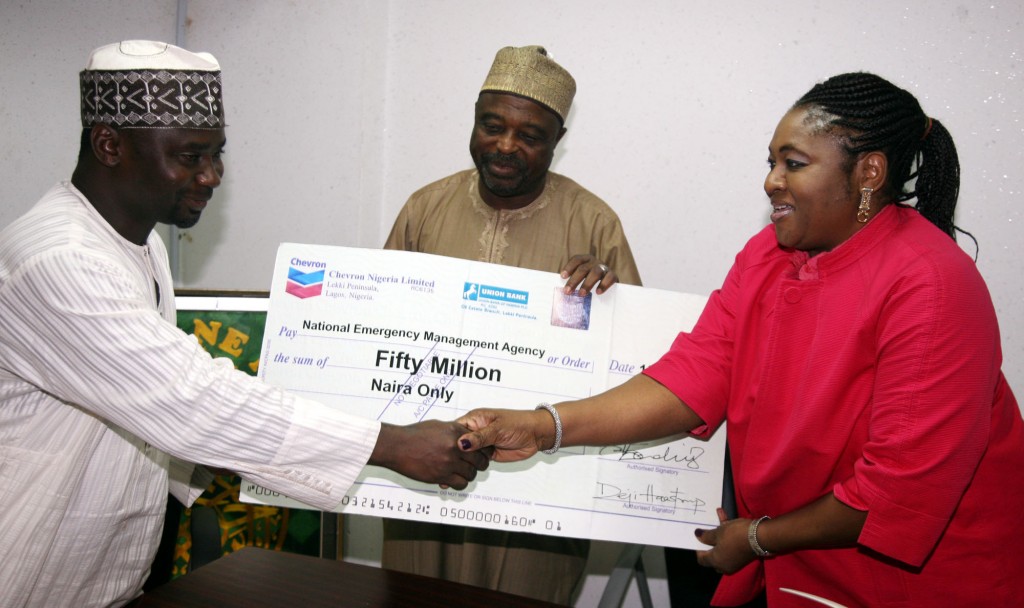 Chevron Nigeria Limited has donated N50 million to victims of flood disaster across the country.
Presenting the cheque at the national headquarters of the National Emergency Management Agency in Abuja on Thursday, the Chairman/Managing Director of Chevron Nigeria Limited, Andrew Fawthrop, said the company was making the donation as part of its belief and commitment to the society.
Fawthrop said: “Our hearts go out to those affected by the flood disaster.
“We wish them well and pray that God will strengthen them in this critical period.
“We are donating relief materials, including foodstuff, water, blankets, palm oil, salt beverages and mattresses to state government relief centres in some of the most affected states in the Niger Delta.
“This cheque donation is meant to complement these relief materials and the efforts of the governments and other organisations that are supporting the relief initiative, both in the Niger Delta and other parts of Nigeria.”
The Chevron boss, who was represented by the Manager of Abuja office of the company, Alhaji Aliyu Mansur, added: “As a responsive and responsible corporate organisation, we reiterate our commitment to continue to partner with Nigeria in mitigating the effects of this natural disaster.
“In line with its “Tradition of Care,” the NNPC/CNL Joint Venture is committed to being a good corporate citizen, focused on building and sustaining productive, collaborative and beneficial partnerships for socio-economic development in Nigeria.”
The Managing Director of NEMA, Mohammad Sani-Sidi, urged major companies operating in the country, especially oil companies, to assist victims of the recent flood disaster across the country.
Speaking while receiving the cheque of N50 million from Chevron Nigeria Limited, one of the NNPC Joint Venture operators, Sani-Sidi said the government alone cannot shoulder the challenge of mitigating the effects of the natural disaster.
He described the recent flood incident as the biggest natural disaster ever in the history of Nigeria.
He also enjoined oil companies to particularly assist the agency in the area of capacity building, pointing out that the agency was always on hand to intervene anytime there is pipeline fire incident anywhere in the country.
He said: “The flood affected 34 states out of the 36 states in the country.
“This is alarming and unprecedented.
“From records, this is the biggest natural disaster ever in this country.
“So many people have lost their lives, so many have lost their means of livelihood and millions of people have been displaced.
“Government has done a lot through NEMA by establishing camps and providing food materials and medical care to millions of victims of the disaster.”
Describing the donation as timely, the DG said it showed that Chevron is a very responsive and responsible organisation that takes the issue of corporate social responsibility seriously.
He noted that a special account will be opened to pay in the donations as they come, assuring the management of Chevron and Nigerians that the N50 million would be forwarded to the Aliko Dangote presidential committee.
Sani-Sidi said: “I want more of this kind of collaborations.
“I had opportunity of speaking with the Group Managing Director of NNPC and we have written to NAPIMS.
“We must find a way of collaborating because anytime you have pipeline vandalism or inferno, it is NEMA that you call first.
“In fact, we almost lost one of our staff recently during a pipeline fire in Ogun State.
“When our staff went there, the hoodlums opened fire on them.
“We had to call in the police and later the military intervened.
“We feel that at this time the oil companies could come in by building our capacity in terms of equipment because NEMA at this point is the only federal government agency that is charged with the responsibility of disaster management.
“Any other agency is just playing complementary role.
“That is why we need to have more collaboration and partnerships with all the stakeholders, including the oil industry.”
Inter-governmental Relations Manager of NNPC, Mrs. Bola Ashafa, assured the NEMA boss that the oil companies were disposed to collaboration for maximum result.