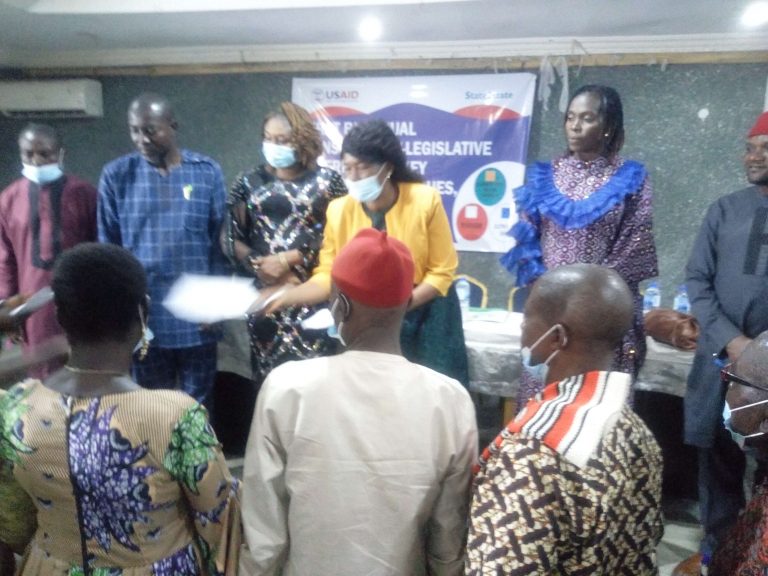 Community Leaders in Ebonyi State have submitted their harmonised Charter of Demand documents to the State House of Assembly for necessary legislative actions
.
The documents containing priority needs of the communities were handed over to the legislators during the first Bi-annual Constituency-Legislative Interface held in Abakaliki, the State capital, on Wednesday.

The event was organised by a Nongovernmental/Civil Society Organization, Development and Integrity Intervention Goals Foundation, with sponsorship by the United States Agency for International Development – funded State Accountability, Transparency and Effectiveness, State2State project.

The demands covered mainly the three State2State priority areas: primary health; education; and Water, Sanitation and Hygiene as it affects selected 18 communities in seven local government areas of the State.

Handing over the CCD to the legislatures by the representatives of the local government areas: Abakaliki, Afikpo South, Ebonyi, Ezza South, Ikwo, Ohaozara and Ohaukwu, they urged the lawmakers to ensure that those needs were captured in the budget and implemented in their constituencies.

They appreciated DIG Foundation and State2State for the initiative and urged the lawmakers to respect the charter of demand, having emanated from their constituents.

Receiving the document, the Clerk of the House, Patricia Anasi, assured the constituents that the documents would be given appropriate administrative attention to ensure that they reach the desired destinations in the legislative arm.

“I am assuring you that I will make sure that honourable members representing you are given these demands so that they can speak further for them,” Anasi noted.

In their separate remarks, the State2State’s Capacity building specialist in the State, Dr. Ibiam Azu, and the the DIG consultant, Dr. Emma Abah, admonished the community leaders to follow up the demands with their legislatures and other political representatives, to ensure that it received desired legislative attention.

Abah urged them to take advantage of the approaching campaigns and electioneering period to advance the charter of demand by ensuring that only candidates committing to respect the charter would receive their support.

The traditional ruler of Nkaleke Unuhu community in Ebonyi Local Government Area, Sunday Oketa, speaking for the traditional rulers, applauded the DIG foundation, describing the meeting as a new dawn in Constituents-Legislators relationship.

Oketa urged participants to give the interface, the needed seriousness it deserved.

Speaking earlier on the objectives of the meeting, the Executive Director of DIG Foundation, Oliver Aja Chima, noted that apart from creating opportunity for citizens to present their prioritised needs to their Legislators, the interface was aimed at drawing attention of members of the House on identified key sector issues and gaps around health, education and WASH.

He added that it was an avenue to advocate for legislative intervention both in policy and attracting Executives’ political will on identified issues.

Meanwhile, one of the Legislators present at the meeting, Victor Aleke, representing Ebonyi North West State Constituency, decried the poor performance of the State in health and other areas, and charged community leaders to pray for the leaders.

He further charged them to do assessment of their intending representatives based on what he or she would commit to do for them, and not on frivolous gifts during campaigns.

Aleke said: “…It is quite unfortunate that what we find here in Ebonyi is a different thing all together, and I am part of it.

“But our earnest prayer is that community leaders should pray for political leaders so that by the next dispensation, Ebonyi State will be the way we want it to be.

“In so many areas, call it in health, education, like I always say, we have failed.”

He, however, noted that the activities of the DIG Foundation has brought enlightenment to the citizens in rural communities in the State concerning governance and the need to speak out on their expectations from government.