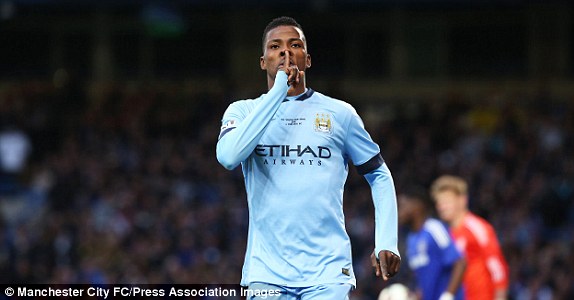 Kelechi Iheanacho is dreaming of facing Cristiano Ronaldo and Real Madrid on Tuesday after scoring twice in the 4-0 win over Stoke City.
Iheanacho’s start against Stoke was only his fourth in the Premier League, but the 19-year-old has impressed every time he has been given a chance by Manuel Pellegrini and quickly become a fan favourite.
His Champions League career has so far been limited to two late substitute appearances against Dynamo Kiev and Paris Saint-Germain, but Pellegrini did not rule out Iheanacho playing a part on Tuesday in one of the biggest games in the club’s history.
Real Madrid visit the Etihad for the first leg of City’s first Champions League semi-final, offering Iheanacho the chance to challenge himself against the likes of Ronaldo, Karim Benzema and Gareth Bale.
“I think I should dream about that because it’s a great team to dream about,” Iheanacho said. “It would be a dream come true to play against them.
“Ronaldo and Messi are the greatest players on the planet so I think playing against them is a big thing to anyone. It would be a big thing to me if I play against him on Tuesday.”
Iheanacho impressed with his all-round play against Stoke, not just scoring two goals but also winning the penalty that Sergio Aguero converted for City’s second.
The teenager did not want to talk up his chances of playing on Tuesday too much, saying: “It was a great performance for everybody, everybody really did well, so it depends on who the manager picks. Everyone is fit to face Madrid.
A needed three points
“(If I was picked) I would feel very great, I would feel very happy. I would grab the opportunity and really work hard.”
Barring injury concerns for Fernando and Yaya Toure, the Stoke victory was the ideal start to a huge week, with City moving closer to securing a top-four spot.
“It was a big match because we need to stay in the top four so United is behind us,” said Iheanacho. “We needed three points.
“This game is a great preparation for us against Real Madrid. On Tuesday, we need to focus and work hard because they’re a good side. I think we are prepared to face them.”
Joining Real, Atletico Madrid and Bayern Munich in the last four has propelled City into the highest echelons of European football – and they are not ready to stop there.
Iheanacho said: “It’s a great achievement for the club and for everybody being in the last four of the tournament. We really need to go forward and get to the final. It would be a dream to get to the final so we’re really hoping for that.”