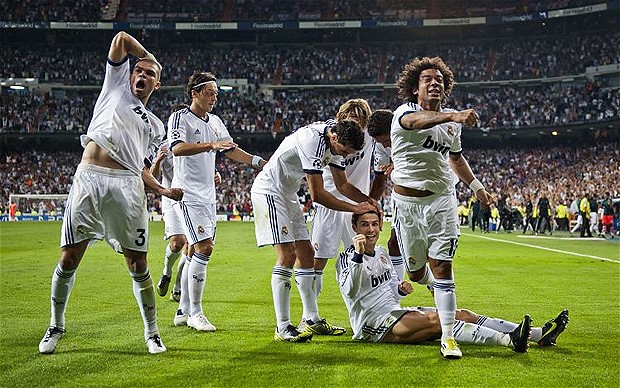 Borusia Dortmund and Real Madrid expectedly are through to the semifinals of the UEFA Champions League after dismissing their respective opponents on Tuesday night.
Dortmund scored twice in injury-time to complete a remarkable turnaround and reach the semifinals of the Champions League by beating Malaga 3-2.
Malaga appeared to be heading for their maiden Champions League semi-final when Eliseu put them 2-1 in front with eight minutes to go.
However, goals from Marco Reus and Felipe Santana in injury-time stunned the Spaniards to complete an unlikely comeback.
Elsewhere, Galatasaray were 3-2 victors on the night but Real Madrid progressed as they triumphed 5-3 on aggregate.
Jose Mourinho remains on course to become the first manager to win the Champions League with three different clubs but he will be concerned by his side’s shipping three second-half goals as the Turks made their evening far more uncomfortable than had seemed likely in the opening 45 minutes.
Unsurprisingly, Ronaldo fired Madrid into the lead.
The Portuguese star punished Galatasaray for not clearing their lines and was on hand to convert Sami Khedira’s low cross from close range.