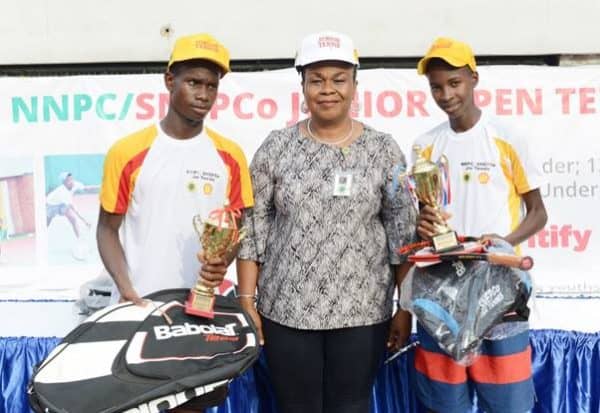 Suleiman Ibrahim has emerged the 2019 Champion in the U-16 category of the just-concluded NNPC/SNEPCo Junior Tennis Tournament held at the Lagos Lawn Tennis Club.
Ibrahim, from Junior Secondary School, Durumi in Abuja, came back after losing his first set 3-10 against David Dawariye from Faith Baptist High School, Diobu, Rivers State, finishing 10-4 and 12-10 in a tie break.
But in the Girls U-16 category, Omolayo Bamidele defeated Favour Moses 12-10 and 10-2 in a straight set to become the winner.
In the Boys U-14 category, Ganiyu Mubarak pipped Isaac Danjuma 10-8, 9-11, and 10-6 in a tie break, while in the girls category, Esther Oni trumped Scholar Otu 11-9, 4-10 and 11-9 in a tie break.
Mohammed Idris stunned the spectators defeating Seun Ogunsakin 7-10, 10-7 and 12-10 in a tie back to emerge winner in the Boys U-12 category, while Adewusi Faith walloped Favour Amaechi 10-6 and 10-7 in a straight set.
Speaking at the finals of the tournament, Managing Director, Shell Nigeria Exploration and Production Company, Bayo Ojulari, said: “Today’s event marks yet another important milestone in our partnership with the tournament’s vision of attracting, identifying and developing young talents in the lawn tennis that was conceived by the International Tennis Academy (ITA) for the development of the sport and the good of society.”
Represented by the company’s Non-Operated Venture Manager, Segun Owolabi, Ojulari said SNEPCo, with the support of the Nigerian National Petroleum Corporation and its co-venture partners, was committed to providing opportunities for Nigerian youths not just in education but also in sports.
Since 2013, SNEPCo, in collaboration with NNPC and its co-venture partners has invested over N40 million to groom young tennis players that can represent the country at international games.
Two former champions of the NNPC/SNEPCo junior tennis championship – Marylove Edwards and Angel McLeod – are currently pursuing professional tennis careers at the prestigious IMG Academy in the USA.
In his remarks at the presentation of trophies to the winners, Group General Manager, National Petroleum Investment Management Services, an NNPC subsidiary, Rowland Ewubare, said NNPC was proud to collaborate with SNEPCo in identifying young talent with the potential of making Nigeria proud in global championships.
Ewubare, who was represented by NAPIMS Deputy Manager, Manpower Planning and Human Resources, Ifeyinwa Mojo-Eyes, said: “We commend SNEPCo for the success of this tournament and will continue to lend our support to worthy ventures as the one that has been showcased today and encourage more in this direction.”
The 2019 season of the NNPC/SNEPCo Tennis Championship served-off May 27 at the National Stadium, Surulere, Lagos Tennis Centre with the round-robin playoffs.
The championship assembled the best players in three age categories Boys and Girls 16s, 14s and 12s for boys and girls.
Speaking after the match, Suleiman Ibrahim said he breathed through his nose to win his opponent whom he described as a “good player”.
Ibrahim also thanked NNPC/SNEPCo for their continued support by their sponsorship of the tournament.